Celebrating the Life of Leon Theremin

Leon Theremin, a Russian inventor, is best known for creating the theremin as well as the Thing, also called the Great Seal bug. Referred to as the “Russian Edison”, his passion for physics and music fostered the growth of electronic instruments on an international scale. Today, we celebrate the life and accomplishments of this influential figure.

Leon Theremin: A Dual Passion for Music and Physics

Lev Sergeyevich Termen, also known as Leon Theremin, was born in St. Petersburg, Russia in August of 1896. Theremin’s father was a doctor while his mother was interested in the arts, particularly drawing and music — a similar interest that Theremin shared and which led to his studies at, and graduation from, a music conservatory. 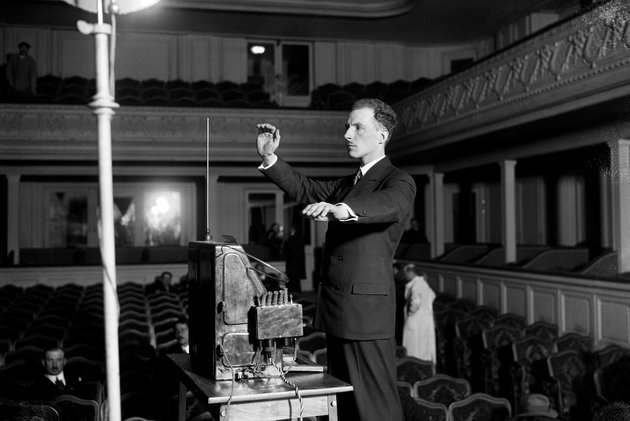 Leon Theremin playing his invention, the theremin. Image in the public domain, via Wikimedia Commons.

Over the years, Theremin developed a passion for physics, which he pursued along with astronomy at the Nikolayevska Military Engineering School in Petrograd (Saint Petersburg). World War I started around this time, and soon Theremin began studying radio operations. Shortly after World War I, during the Russian Civil War, he accepted a position at the Ioffe Physical-Technical Institute, where he began to invent a number of devices. These devices included a high-frequency oscillator that was able to accurately evaluate the dielectric constant of gases; a motion sensor that could act as an alarm; and the invention for which he became famous: the theremin.

Creating Music with the Wave of a Hand

When experimenting with the oscillator, Theremin noticed that it changed pitch when his hand moved over the device’s antenna. He fine-tuned the device, first calling it the thereminvox and then later the theremin. In addition to being one of the first electronic instruments, this device was the first to be mass produced, the first to be portable, and the only one that can be played without being touched. Instead of using keys or strings, a thereminist plays by moving their hands between two antennas, one of which controls the pitch while the other adjusts the volume. 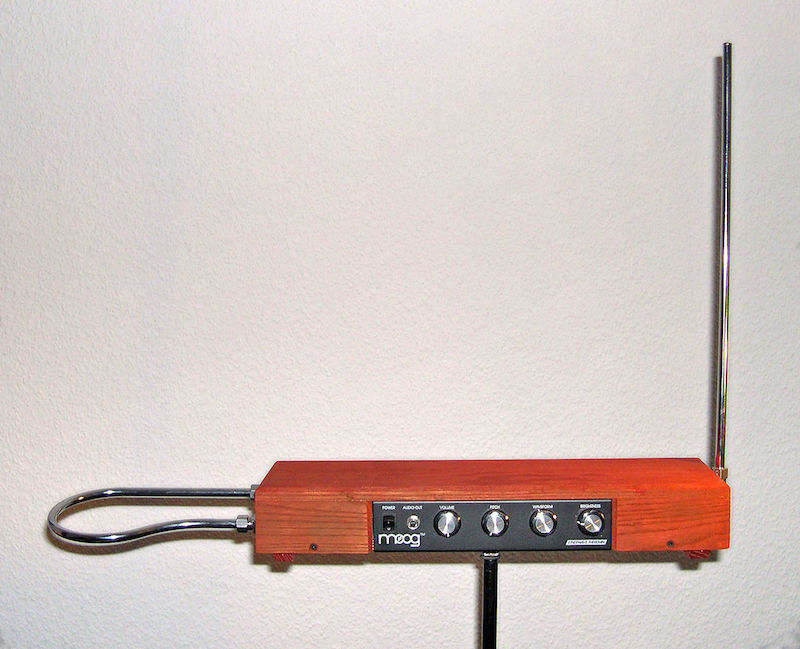 Word about the theremin spread after Theremin displayed the instrument at an electronics conference in Moscow. The inventor started touring with the device and even had the chance to perform for Lenin. The instrument’s sound had an otherworldly quality, leading it to be featured in the soundtracks for movies such as Spellbound, The Lost Weekend, and The Day the Earth Stood Still. An updated version of the theremin, the electro-theremin, can also be heard in “Good Vibrations” by the Beach Boys.

Experimenting with Other Electronic Instruments in the United States

In the 1920s, Theremin began touring around Europe with his theremin technology, while also developing the interlacing technique used for video to apply it to a working television. In 1928, he played with the New York Philharmonic and patented the theremin. RCA then decided to mass produce his device, but the theremin’s learning curve prevented it from gaining a lot of popularity and commercial use.

He then began teaching the theremin to those who expressed interest — including Clara Rockmore, who became a pioneer for the device — and continued to develop other electronic instruments. He created the Rhythmicon, the first electronic rhythm machine commissioned by Henry Cowell, as well as an electronic cello and the terpsitone, a platform that played music in response to a dancer’s movement. In New York, Theremin even had his own terpsitone studio where dancers had the opportunity to practice with the instrument. 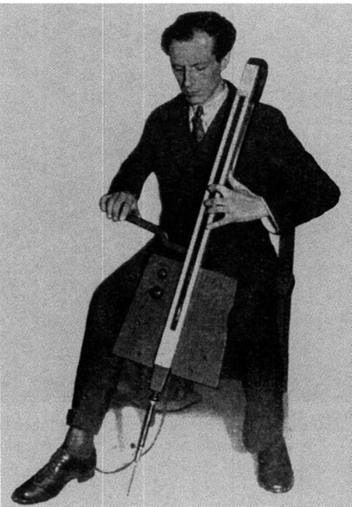 Theremin playing his electronic cello. Image in the public domain, via Wikimedia Commons.

Theremin abruptly returned to Russia in 1938, for reasons unknown, and was subsequently arrested. After a few months in a Siberian labor camp, the Soviets transferred Theremin to a secret laboratory to work with other scientists such as Andrei Tupolev. It was during this time period that he created the Thing.

The Thing was a passive resonant cavity device that didn’t require any wires or power sources to work. It consisted of an antenna connected to a small cylinder that was solid on one side with a thin membrane on the other. The bugging device didn’t become active until struck by the correct frequency, a process currently known as “illuminating” a device. The membrane then acted as a microphone, transmitting sounds at a slightly higher frequency. 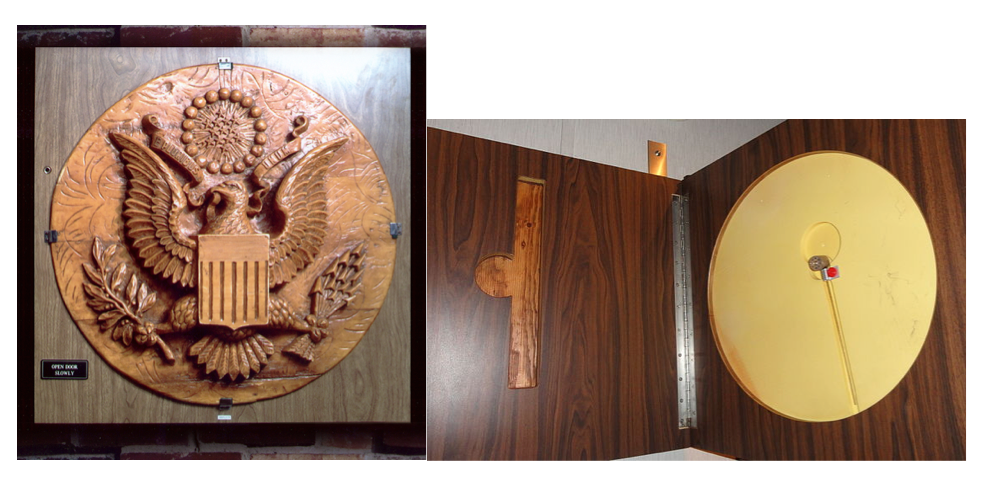 The technology within the Thing, however, is not the reason that it’s famous. Its fame derives from the fact that it stayed undetected in the U.S. embassy in Moscow for nearly seven years. In 1945, schoolchildren presented a carving of the Great Seal of the United States to the U.S. ambassador as a “symbol of friendship” for being an ally during World War II. Unaware that the carving contained the Thing hidden inside, the Great Seal hung in the ambassador’s office until it was discovered in 1952.

Theremin continued to work in the same laboratory until the middle of the 1960s. He then began work at the Moscow Conservatory of Music, where he went back to developing electronic musical instruments for the next ten years, before becoming a professor of acoustics at Moscow University. In 1989, Theremin once again began to travel, and in 1991, filmmaker Steven Martin, who was creating a documentary about the thereminist, brought him to New York. Here, Theremin was able to reunite with Clara Rockmore. Before he passed away in 1993, Theremin, 97 at the time, gave one last performance on the theremin.

The impact of Leon Theremin’s accomplishments can still be felt today. While listening devices like the Thing aren’t used due to advances in modern technology, the idea of illuminating devices remains a fundamental concept of acoustics and electronics. Another idea of his, techniques for interlacing video, continues to be widely used to improve the quality of video signals. Then there’s his namesake, the theremin, which is still played by enthusiasts.