While trying to account for a discrepancy in the atomic weight of nitrogen, British chemist Sir William Ramsay discovered a new gas that he named argon — subsequently unlocking a whole set of elements previously unknown: the noble gases. This groundbreaking achievement added a new column to the periodic table and laid the foundation for many other elemental connections in the fields of chemistry and quantum mechanics. For this great discovery, he was awarded the Nobel Prize in 1904.

William Ramsay was born in Glasgow, Scotland, on October 2, 1852. An interest in science seemed to run in the family — his father, William C. Ramsay, was a civil engineer and surveyor and his uncle was celebrated geologist Sir Andrew Ramsay. Young William Ramsay decided to try a different branch of science: When it was time for university in 1866, he pursued chemistry studies at the University of Glasgow. 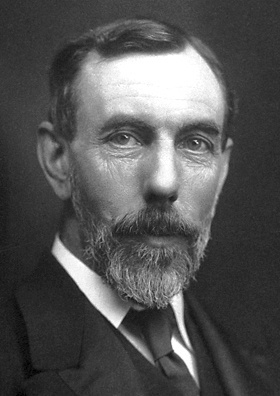 Sir William Ramsay. Image in the public domain in the United States, via Wikimedia Commons.

In this subject he thrived, taking on additional studies and work in the lab of Robert Tatlock, who was then Glasgow’s city analyst. However, Ramsay left the school before graduating because he saw opportunities to study under the most brilliant chemists at the time. First, he trained with Thomas Anderson for a few months, then matriculated at the University of Tübingen in Germany as a doctoral student under organic chemist Rudolph Fittig. He received his doctorate in 1872 with a thesis on orthotoluic acid and its derivatives.

After graduating, Ramsay returned to Scotland and took on assistant positions at Anderson College and then at the University of Glasgow. During this time, he continued his research in organic chemistry, closely studying alkaloids and their relationship to the nitrogen-containing compound pyridine. While Ramsay is well known for his later work in physical chemistry, this early interest in the oxides of nitrogen prepared him for his most famous discoveries.

The Hunt for a Mysterious Inert Gas

In the 1880s, William Ramsay’s research in physical chemistry found him testing solutions of metals as well as boiling points and evaporation, working with fellow chemist Sydney Young. Ramsay, who had by this time been appointed chair of chemistry at University College, Bristol, and professor of general chemistry at University College London, copublished with Young ~30 papers on the subject of liquids and vapors and their characteristics. He also worked with chemist John Shields to confirm a law of Loránd Eötvös’ on molecular surface tension and temperature. Then, working with Lord Rayleigh, he made the first of many discoveries that would launch him into the spotlight as one of the most formative chemists of the age.

Through experiments, Ramsay and Rayleigh noticed something strange about the density of nitrogen: Chemical nitrogen weighs less than atmospheric nitrogen. Ramsay rightly theorized that this was due to some kind of heavy gas in the nitrogen in the atmosphere, and so, both scientists put this to the test using their own methods. Rayleigh turned to an old experiment inspired by Henry Cavendish to find that there was an unknown gas that didn’t react, while Ramsay designed a new experiment that removed all of the known elements from the air.

When Ramsay and Rayleigh presented their findings to each other, they realized that this was indeed a previously undiscovered element that had its own density and characteristics. Since it didn’t react with the other elements in the air and didn’t seem to do much of anything, they named it “argon”, meaning “lazy”. In 1894, Ramsay and Rayleigh officially announced their discovery of argon to the British Association and explained that this inert element made up almost one percent of the atmosphere.

Discovering Group 18 of the Periodic Table: The Noble Gases

After his success with argon, William Ramsay kept experimenting with similar methods to seek out the element elsewhere, such as in minerals. While attempting to free argon from cleveite, he discovered that it was not argon he had isolated, but another new element: helium. Until that point, helium had only been known on the solar spectrum. 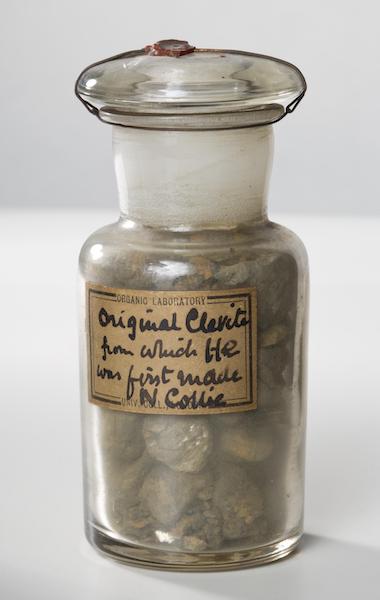 A sample of the original cleveite from which William Ramsay first isolated helium. Image by UCL Mathematical and Physical Sciences from London, UK — Own work. Licensed under CC BY 2.0, via Wikimedia Commons.

Encouraged by these two discoveries, Ramsay considered that there might be more elements, especially when carefully studying their positions on Mendeleev’s periodic table. Over subsequent years, he was able to further isolate and discover other elements, contributing an entire group of noble gases, Group 18, to the periodic table:

Discovering these noble gases was just the beginning — Ramsay continued to experiment with them for the rest of his career. Notably, he was able to show that radon is emitted along with helium during the radioactive decay of radium, which helped us understand nuclear reactions and radiochemistry.

The Noble (and Nobel) Achievements of Sir William Ramsay

William Ramsay’s joint discovery of argon with Lord Rayleigh earned him the Nobel Prize for Chemistry in 1904. From then on, he was a very famous and sought-after chemist, becoming a business consultant and director at chemical companies as well as a popular writer for scientific publications. In addition to the Nobel Prize, he received several medals and awards from respected institutions. He became a fellow of the Royal Society and president of the Chemical Society and the British Association for the Advancement of Science. In 1902, he was knighted, becoming Sir William Ramsay. 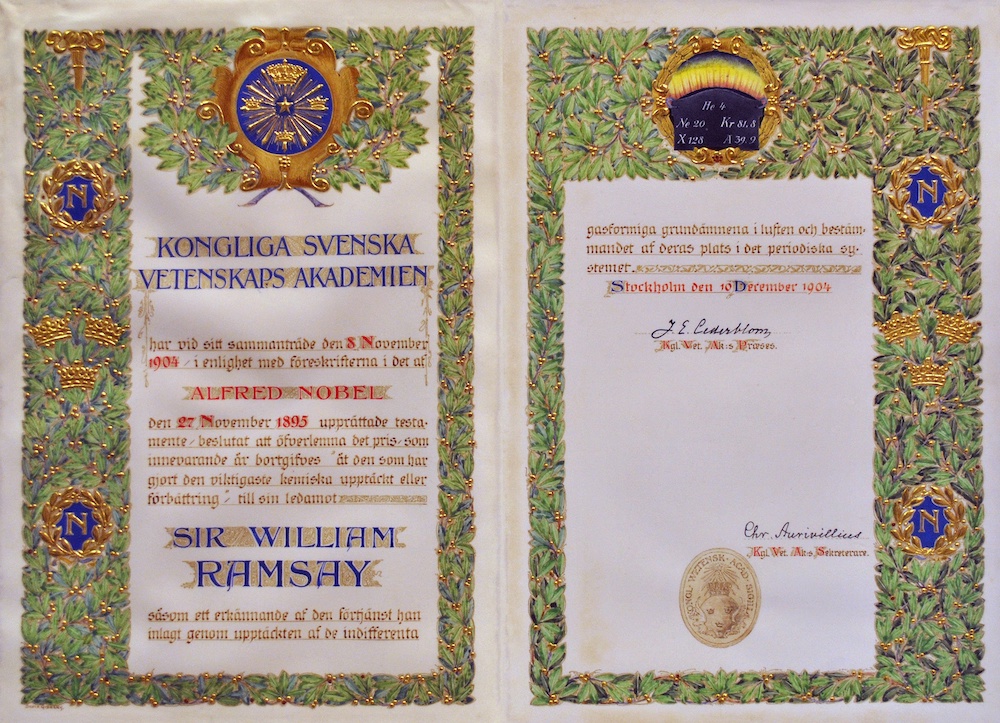