Modeling and Simulation of Multiphase Flow in COMSOL®: Part 1

The study of multiphase flows with mathematical modeling may be done at several scales. The smallest scale can be around fractions of micrometers, while the largest scales are up to meters or tens of meters. These scales can span about eight orders of magnitude, where the largest length scale may be a hundred million times larger than the smallest scales. This implies that it is numerically impossible to resolve multiphase flows from the smallest to the largest scales using the same mechanistic model throughout the whole range of scales. For this reason, the modeling of multiphase flow is usually divided into different scales.

On the larger scales, it is impossible to solve the model equations if the phase boundary has to be described in detail. Instead, the presence of the different phases is described using fields, such as volume fractions, while interphase effects such as surface tension, buoyancy, and transport across phase boundaries are treated as sources and sinks in the model equations of so-called dispersed multiphase flow models.

The figure above shows the principal difference between the two approaches for separated and dispersed multiphase flow models. In both exemplified cases, a function, Φ, is used to describe the presence of the gas and liquid phases. However, in the separated multiphase flow model, the different phases are exclusive, and there is a sharp phase boundary between them where the phase field function, Φ, changes abruptly. The phase field function does not have a physical meaning other than keeping track of the location of the phase boundaries.

The level set and phase field methods are both field-based methods in which the interface between phases is represented as an isosurface of the level set or phase field functions. The moving mesh method is a completely different approach to the same problem. With this approach, the phase boundary is modeled as a geometrical surface separating two domains, with one phase on each side in the corresponding domains.

The finite element mesh does not have to coincide with the phase boundary between two phases in the phase field and level set methods.

In contrast, the figure below shows the verification model of a rising bubble with moving mesh. The mesh follows the shape of the phase boundary and the edges coincide with this boundary. We can also see the drawback of the moving mesh model. The bubble deforms to such an extent that two secondary bubbles detach from the mother bubble. At this point, the original phase boundary has to be divided into several boundaries. The logic for that is not completely straightforward and this is not yet implemented in the COMSOL® software. Hence, the moving mesh method in the COMSOL® software cannot deal with topology changes. The phase field methods do not have this drawback and can handle any changes in shape of the phase boundary.

The rising bubble verification problem. A topology change occurs when two secondary bubbles break away from the mother bubble.

When Do We Use Field-Based Methods Vs. Moving Mesh?

Moving mesh methods allow for a higher accuracy for a given mesh. The fact that we can apply forces and fluxes directly on the phase boundary is an advantage in this respect. The field-based methods require a dense mesh around the interphase surface in order to resolve the isosurface that defines this surface. It is difficult to define an adaptive mesh that accurately follows the isosurface, which leads that the mesh usually has to be dense in a large volume around the isosurface. This lowers the performance of the field-based methods in relation to moving mesh for the same accuracy. So, when do we use the different methods?

In cases where turbulence models are used, the details of the flow are lost, since only the mean velocity and pressure are resolved. With this in mind, effects of surface tension also become less important for the macroscopic description of the flow. Since turbulence also implies that the flow is relatively vigorous, also at the surface, it is almost impossible to avoid topology changes. Hence, for turbulent flow models and separated multiphase flow combinations, the level set method is preferred. Both the level set and phase field methods can be combined with all turbulence models in COMSOL Multiphysics, as seen in the figure and animation below. 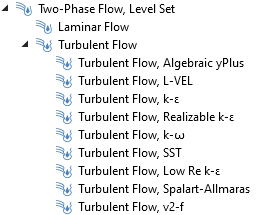 All turbulence models can be combined with the phase field and level set methods for two-phase flow in COMSOL Multiphysics.

Two-phase flow with water and air in a reactor modeled using the level set method in combination with the k-e turbulence model.

In cases where the phase boundaries cannot be resolved due to their complexity, dispersed multiphase flow models have to be used.

When Do We Use the Different Dispersed Flow Multiphase Flow Models?

The mixture model used to model 5 different sizes of bubbles as the multiphase flow mixture is forced through an orifice. The shear in the flow causes larger bubbles to break up into smaller ones.

In practice, the Euler–Euler model is only applicable for two-phase flow and even then, it is an expensive model with respect to computational cost (CPU time and memory). It is also relatively difficult to work with and requires good initial conditions to get convergence in the numerical solution.

When we have a few (tens of thousands but not billions) very small bubbles, droplets, or particles suspended in a continuous fluid, we may be able to use Euler–Lagrange models to simulate a multiphase flow system. These methods have the benefit of being relatively inexpensive, computation-wise. These models are usually also “nice” from a numerical point of view. They are therefore preferred when there is a relatively small number of particles of a dispersed phase in a continuous fluid.

Note that there are also methods to mimic a larger number of particles with Euler–Lagrange methods, using interaction terms and volume fractions that may mimic a system with billions of particles. These methods can be implemented in COMSOL Multiphysics, but they are not available in the predefined physics interfaces. 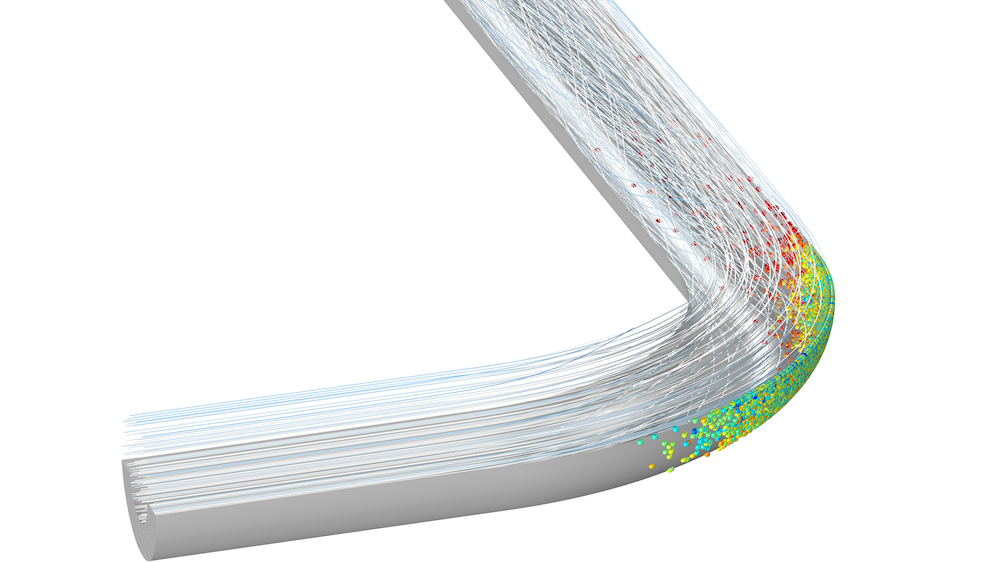 The mixture model is able to handle any combination of phases and is also computationally inexpensive. In most cases, it is advised that we start with this model, unless we deal with systems like fluidized beds (large particles with high density and high volume fractions of the dispersed phase), which can only be modeled with Euler–Euler models. 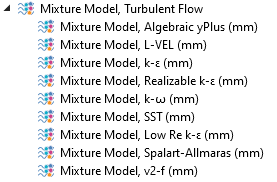 The mixture model can be combined with any turbulence model in COMSOL Multiphysics.

Solving the numerical model equations for multiphase flow may be a very demanding task, even with access to supercomputers. If there were no computer power limitations, the surface tracking methods would be used for all types of mixtures. In reality, these models are limited to microfluidics and for the study of free surfaces of viscous liquids.

The dispersed multiphase flow methods allow for the studying of systems with millions and billions of bubbles, droplets, or particles. But even the simplest dispersed multiphase flow models can generate very complex and demanding model equations. The development of these models into variations that are well adapted to describe specific mixtures has allowed for engineers and scientists to study multiphase flow with a relatively good accuracy and with reasonable computational costs.

Stay tuned as we continue our discussion of multiphase flow simulation on the blog!

thank your for this nice and readable summary of the available models for multiphase flow in Comsol. In the Euler-Lagrange section, you mention “that there are also methods to mimic a larger number of particles with Euler–Lagrange methods, using interaction terms and volume fractions that may mimic a system with billions of particles. These methods can be implemented in COMSOL Multiphysics, but they are not available in the predefined physics interfaces.”
Are there plans to include this functionality in coming Comsol versions. Or could you point to an example where this is added manually (maybe via support!?)?

Thanks a lot and looking forward to the next part of your multiphase series!
Thomas

Dear Thomas,
The functionality will be included in a future version of COMSOL Multiphysics. But already now, you can include these effects manually in teh Particle Tracing Module. In the Fluid-Particle Interaction multiphysics coupling, there is an option for specifying a Force Multiplication Factor to let each simulated particle represent a larger number of physical particles. You can also use an Accumulator feature to extract a volume fraction which can be used to model density and collision effects in the fluid flow interface.
Best regards,
Ed

Thanks for this interesting blog. It has been very helpful for me for understanding the different multiphase methods in COMSOL. I am looking forward to the second part!

At this moment I am modelling a multiphase problem myself; spreading of a droplet of water (surrounded by air) between two flat plates. I am struggling a bit with selecting the ‘best’ multiphase method. I am interested in the propagation of the interface (droplet boundary) and in the future I foresee that topological changes will occur (merging of multiple droplets), when I will extend the model. So I am left with level-set and phase-field. Surface tension cannot be neglected; capillary effects are present. Could you please explain to me why phase-field is preferred over level-set if surface tension is relevant, as mentioned in your blog? From COMSOL support I understood that if the fluid motion is convection dominated, level-set is preferred (for computational reasons), while if it is diffusion dominated, phase-field is the way to go. What is your opinion?

Thank you for your kind words. Right now I am working on the release of v5.6 but when this is done I will get back to writing on the second part. We actually have improved functionality for phase field and level set in the cases with large differences in density and viscosity for the involved fluids.

The reason why we recommend phase field for cases with large impact from surface tension is that the phase field method has better description of surface tension than level set. The phase field description is based on the excess energy at the interface between the phases. The level set is based on the evaluation of curvature, which is difficult to compute accurately, unless you have a very dense mesh or higher order base functions.

In addition, the phase field method works very well with no-slip conditions. With level set you have to apply a slip condition, which would probably influence your results in a somewhat non-physical way.

The reason why level set may be preferable for convection dominated problems is because it is a less computationally expensive method, and if there is a lot of convection, then the surface tension effect may be smaller compared to other forces (relatively).

Thanks for the response and explanation. I am looking forward to seeing the improved functionality for phase-field and level-set, as I am working with these large differences in density and viscosity for the involved fluids as well!