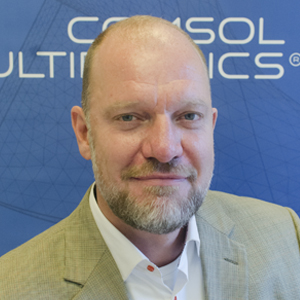 Many exciting features for chemical engineering modeling were introduced in COMSOL Multiphysics version 5.0. In this blog post, I will discuss the most important updates. There are some new modeling interfaces, such as the Chemistry interface, and some that have been revamped and improved, like the Reaction Engineering interface. To begin with, I will recap the modeling interfaces for reaction engineering and mass transport.

If you remember, the Reaction Engineering interface is the tool that is used to experiment with perfectly mixed chemical reactors or reactors where composition and temperature only vary along one direction. These ideal reactor models are usually described with ordinary differential equations (ODEs) that account for changes in the dependent variables (for example, composition and temperature) along one independent variable (usually time or a single space variable).

When model equations of this type are discretized and converted to numerical model equations, the resulting equation systems have relatively few unknowns (degrees of freedom) compared to an equation system that also includes space discretization. The virtue of this kind of model is that the equations can be solved relatively quickly, little RAM is required, and many “what-if experiments” can be done in a short time.

The results from ideal reactor models can also be validated by comparing them with laboratory measurements, which are usually carried out under perfect mixing. Experimental measurements and ideal models can be used for estimating the parameters that describe, for example, reaction kinetics. These parameters can later be used for space-dependent models. 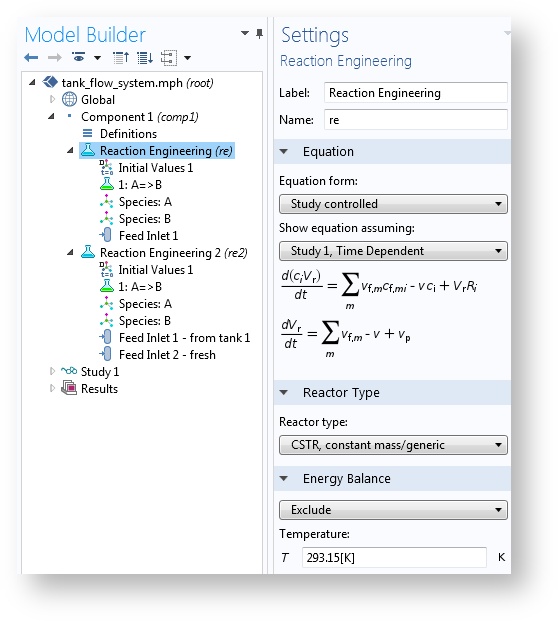 In some tubular reactors — for example, plug flow reactors — the composition and temperature can often be decently well described by accounting for variations along the axial direction and neglecting variations in the radial direction. Such models are usually referred to as ideal tubular reactor models. At steady state (no variations in time), these models are described by ODEs with the axial space variable (z) as the only independent variable.

However, we usually need to validate the assumptions done in ideal models by comparing them with space-dependent models and models that describe variations along several independent variables (x, y, z, and t). In addition, scale-up from lab scale to pilot or full scale often introduces spatial and temporal variations in composition, pressure, temperature, and other modeled fields. In order to facilitate this work, COMSOL Multiphysics includes a feature called the Generate Space-Dependent Model that exports the chemical system described in the space-independent model to a space-dependent model. 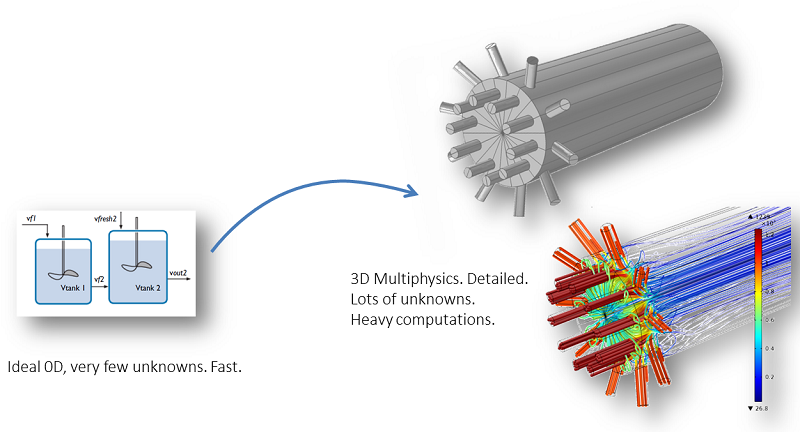 A perfectly mixed model and a space-dependent model.

With the New Chemistry Interface, Chemical Reactions Are Made Easy

In COMSOL Multiphysics version 5.0, the Chemistry interface shares some similarities with the Materials node in that it harbors information that can be used by many model interfaces in several model components. Whereas the Materials node contains physical properties, the Chemistry interface can contain a library of thermodynamic and kinetic properties as well as reaction mechanisms of a given chemical system.

The functionality is similar to what is available in the Reaction Engineering interface. However, the primary purpose is not to solve the model equations, but rather to administrate on a global level the chemical reactions and their kinetic and thermodynamic properties for use in space-dependent models. As such, it does not solve any equations in itself. 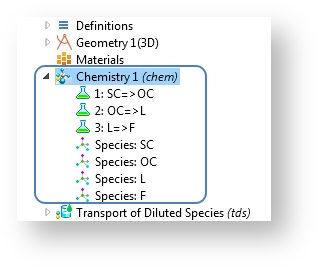 The figure below shows an example of model results in which you start with the Chemistry interface, and then continue using the Transport of Diluted Species and Darcy’s law interfaces to model the reacting flow and the velocity and pressure fields, respectively, in a 3D packed bed reactor. 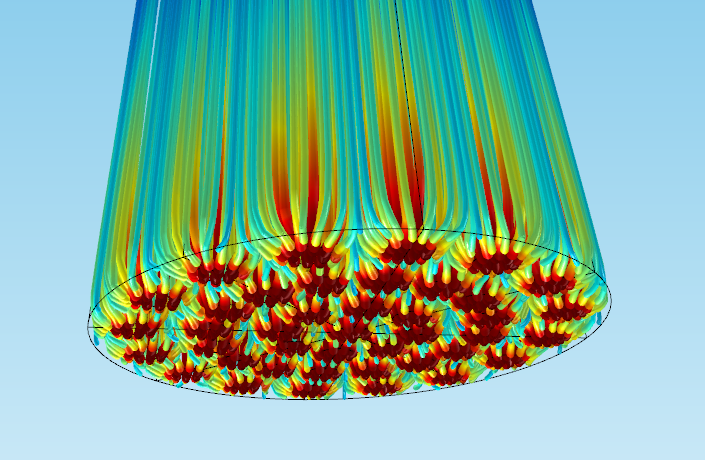 A 3D packed bed reactor application with a holed bottom plate. The lines represent the flow streamlines of reacting gas, and the color is the concentration of reactant in moles/m3. Red represents high concentration and blue indicates low concentration.

When you have added the Chemistry interface and defined the mapping to the species in the transport interfaces, the reaction rates appear automatically in the Reaction feature.

With a Chemistry node in the application, the reaction rates are automatically defined on the Reaction feature in the transport interfaces. 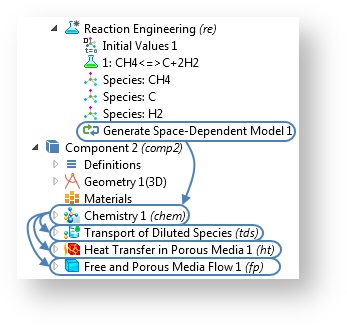 The introduction of the Chemistry interface makes the modeling steps easier.

The Ability to Handle a Large Number of Reactions

The Species Groups and Reaction Groups features have been introduced to make it easier to handle large amounts of reactions and species. These features list all reaction properties in table format. Reaction kinetics and thermodynamics included in CHEMKIN files can be imported automatically into these groups. The Reaction Groups feature makes it easier to maintain large numbers of chemical reactions. The example shown above is from the Homogeneous Charge Compression Ignition of Methane model.

If a chemical species is designated to be a surface species, the chemical reaction in which it partakes is automatically set up as a surface reaction. Generation of space-dependent models adds these to surfaces in the settings for the boundary conditions.

The Hydrocarbon Dehalogenation in a Tortuous Microreactor model from the Model Gallery demonstrates the new surface reactions capabilities. The surface species can be marked “surface” or named with an “(s)” postfix to create a surface reaction.

The Reaction Engineering interface includes a new reactor type called Generic CSTR. This continuous stirred tank reactor has no restrictions of constant mass or constant volume. That means that it can be filled or drained during the simulation. Multiple inlets are possible in this reactor. 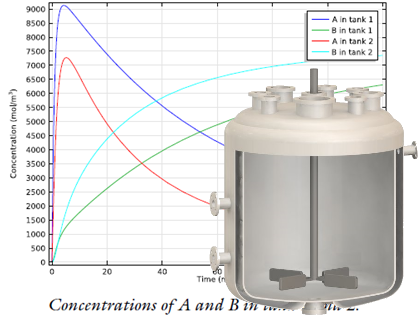 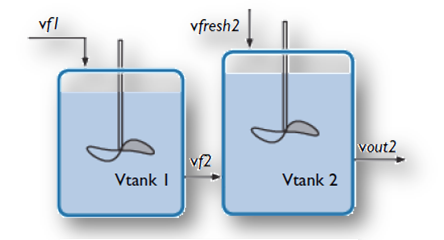 A stirred tank reactor with two inlets (top) is modeled with the new Generic CSTR, as shown in this example from the Model Gallery. Top image by Robert Ashe. Licensed under CC BY 2.5 via Wikimedia Commons.

In the Reaction Engineering and Chemistry interfaces, there are improved model properties of mixtures. Viscosity, heat capacity, thermal conductivity, and density are examples of properties that can be calculated for both gas mixtures and liquid mixtures. 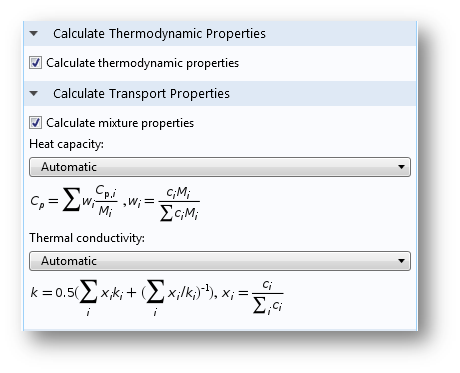 An example of automatic mixture properties.

Model Your Kinetics and Equilibrium with Activities

There is now an option to calculate rate expressions and equilibrium relations with the species activities as input rather than concentrations. 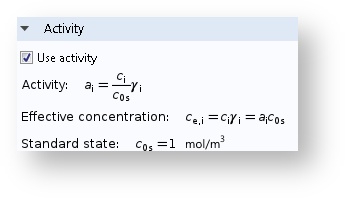 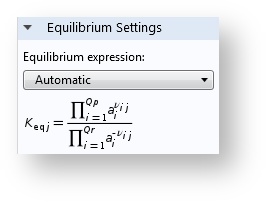 Activities can be used in the expressions for equilibrium and kinetics.

I hope you will find these new features useful in your simulation work. Happy modeling!

i am a PHD student in the university of leeds. i am working on the migration of radionuclide in underground repository. i wonder if I can contact you through your privet email to discuss few things about my thesis.

Hi Baqer, please send an email to support@comsol.com and mention me in the text.