A while back, I had the opportunity to speak with Steven Conrad, a critical care physician at the Louisiana State University (LSU) Health Science Center in New Orleans. Not only is Dr. Conrad a physician as well as a professor at LSU, he’s also a biomedical engineer who uses finite element analysis (FEA) to conduct research on the design of dialyzers. Dr. Conrad uses COMSOL Multiphysics to gain a deeper understanding of the physics behind these devices, and to create simulations that are on the cutting-edge of dialyzer design. Here, I would like to share some of his current research and how he uses FEA and multiphysics simulations to optimize the design of dialyzers. 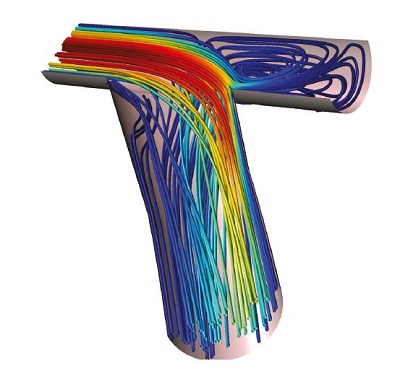 Velocity streamlines depicting blood flow in the junction between
an inflow artery (left) and a synthetic vascular graft (bottom) in a
simulated vascular access circuit.

In an article I wrote based on an interview with Steven Conrad (“Physician Uses Multiphysics Simulation to Improve Dialyzer Designs“, Medical Design Briefs), I discussed his dialyzer designs as well as the implementation of his finite element models.

The U.S. Department of Health and Human Services reports some daunting facts about kidney diseases and renal failure. It states that one in nine American adults (that’s over 26 million people!) suffer from kidney failure, which in turn accounts for nearly $40 billion in medical resources per year (as of 2009). With the number of patients needing dialysis increasing by 5 to 10 percent each year, it is evident that yearly treatment costs will continue to grow. Optimizing the dialysis process could not only increase a patient’s chance of survival, but also decrease medical costs by relieving the financial burden of dialysis, which will then allow the treatment of more patients.

Renal replacement therapies, such as dialysis, work to remove electrolytes, metabolites, and excess water that build up in the body as a result of kidney failure. One such device used in many renal replacement therapies is a hemodiafilter — a dialyzer that is composed of an artificial membrane. The membrane is made up of axisymmetric hollow fibers and dialysate, a non-Newtonian fluid that filters toxins and solutes from the blood. The dialyzer is attached to a vascular access graft from an arteriovenous fistula. Waste products are filtered into the dialysate while the remaining clean blood is pumped back into the body though a vein. 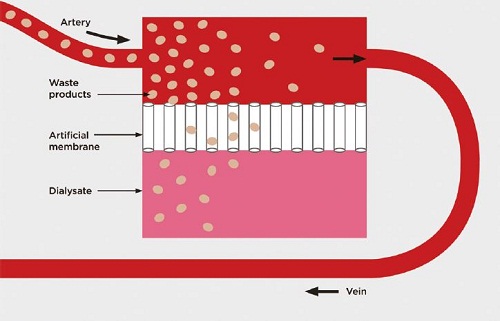 Improvements to Past Dialyzer Designs

The use of multiphysics simulations is growing in the medical and biological fields. The design of dialyzers is one great example of therapies where simulation makes a big difference. Previous dialyzer models had mostly been designed empirically, or used lumped-compartment models that greatly simplified the interactions taking place within the dialyzer. Dr. Conrad’s designs offer many improvements to these simplified models.

One of the main improvements is a more complete simulation of the porous membranes that line the hollow fibers of the dialyzer. Dr. Conrad’s models take into account the near-membrane interactions that occur between blood and membrane. Such interactions include convective and diffusive transport across the membrane and the backfiltration that can occur when the dialysate moves back into the filtered blood.

You can learn more about the physics that were implemented in Dr. Conrad’s dialyzer simulations by checking out the full-length article on the Medical Design Briefs website.

Introduction to Modeling Soap Films and Other Variational Problems

Please contact your support team for help with your particular modeling problem.