In 1880, Alexander Graham Bell wrote a letter to his father, saying: “I have heard articulate speech by sunlight! I have heard a ray of the sun laugh and cough and sing!” He was talking about his latest success, the photophone, which he called his “greatest invention” shortly before his death. The photophone did not revolutionize the field of imaging, but an unintended effect Bell noticed while developing it did…

In basic terms, photoacoustics is when light induces vibrations in matter. The effect occurs when light pulsed onto the surface of a material generates heat. The heat causes the lighted area of the material to expand, which sends a pressure wave through the solid material.

A simple representation of the photoacoustics process.

Alexander Graham Bell discovered photoacoustics by accident when he was working on the development of the photophone, a followup to his recently developed telephone that operated via modulated sunlight instead of electricity. 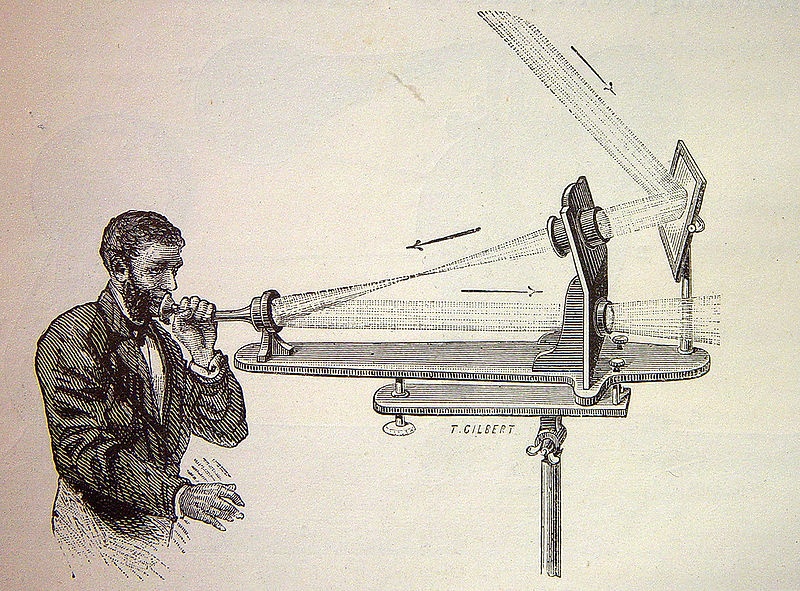 An illustration of the photophone. Image is in the public domain, via Wikimedia Commons.

Out of all of his innovations, Bell was most proud of the photophone. The rest of the world didn’t feel the same. For one, the device didn’t work when it was cloudy or rainy (obviously, as it needed sunlight). In an article in The New York Times from August 1880, the photophone was even ridiculed:

“Does Prof. Bell intend to connect Boston and Cambridge…with a line of sunbeams hung on telegraph posts[?]…There is something about Professor Bell’s photophone which places a tremendous strain on human credulity.”

Despite its stunted success, Bell made an unintentional discovery through the photophone. He observed that when he illuminated a solid material with a rapidly pulsed beam of modulated light, it caused an acoustic frequency to emit at the same frequency as the beam of light. Bell called the effect “photophonic phenomena” or “radiophony”; what we now know as photoacoustics.

The Revival of Photoacoustics in Research

Photoacoustics research fell by the wayside for a few decades, perhaps due to the unpopularity of the photophone or the scientific community’s focus on other areas of study. A gradual revival of interest in photoacoustics began in the late 1930s, spanning from Russia to Germany to the U.S.

An early example of photoacoustics research came about in France within the biomedical field. In 1964, a pulsed laser light was directed into the eyes of a rabbit to study its retinas. Don’t worry — the rabbit wasn’t harmed and the laser only caused it to blink a few times. 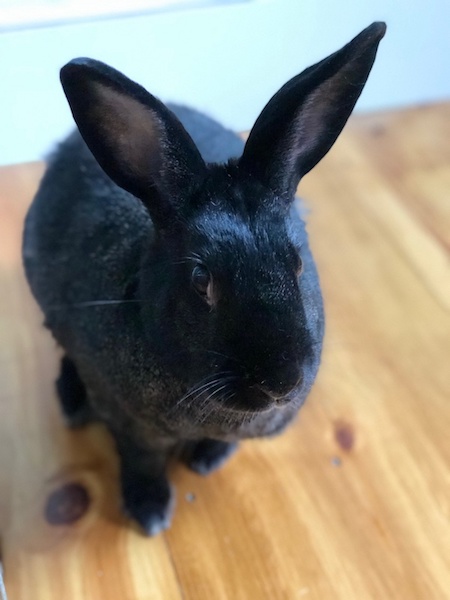 The first in vivo photoacoustics study took place a few decades later, in 1993, when a pulsed laser was used to produce an image of a human finger. Moving into the 21st century, photoacoustics has become more accepted as a biomedical research method. (Ref. 1)

Nowadays, the photoacoustics effect and photoacoustic imaging are useful for nearly any application area that involves generating images of opaque material samples. Using acoustics modeling software, it’s possible to study this phenomenon and optimize devices that rely on it. 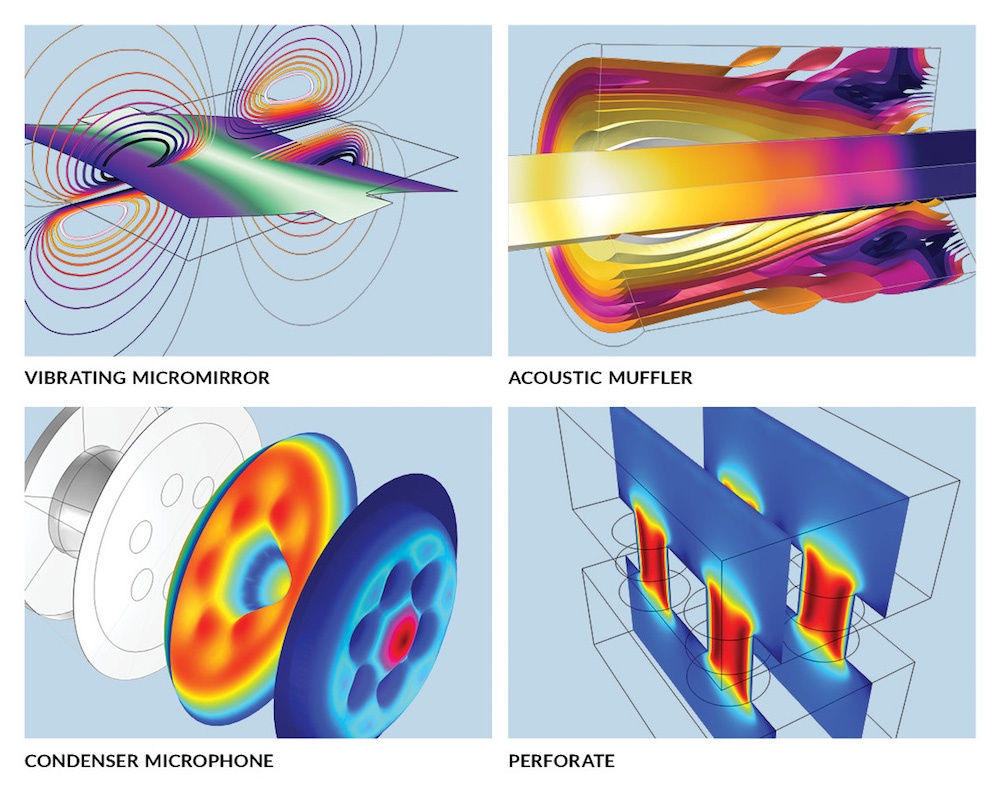 By adding the Acoustics Module to the COMSOL Multiphysics® software, you gain access to the Thermoviscous Acoustic, Frequency Domain interface, which can be used to simulate photoacoustic effects. This interface includes predefined functionality for modeling thermoviscous acoustics phenomena and solving the full linearized compressible Navier-Stokes, continuity, and energy equations for a fluid. This is useful because the thermoviscous acoustics equations are complex and can be difficult to solve “by hand”. In addition, because of the large 3D domains involved, a typical photoacoustics model may involve many degrees of freedom, taking up valuable computational memory and time.

Consider the Photoacoustic Resonator example model, in which a pulsating laser heats a gas, which causes it to expand and contract, creating pressure waves. A well-designed photoacoustic resonator can be used as a sensor for measuring the material parameters of a gas; for instance, a system’s resonance frequency depends on the gas inside.

Geometries of the resonator (left) and heat source (right) for a photoacoustic resonator model.

To find the frequency in the resonator, you can add the Thermoviscous Acoustic, Frequency Domain interface as well as a Heat Source domain feature, which accounts for heat generated by the pulsating laser. Boundary conditions applied to the model geometry (which, in this example, is based on the published research referred to in the model documentation) include the:

The laser beam energy distribution is given by a Gaussian with the standard deviation \sigma_0 — which, in this model, is 1/100 of the resonator radius. By using a boundary layer mesh, only a small section along the longitudinal axis of the geometry requires fine mesh elements to resolve the laser pulse width. The rest of the geometry can employ a coarser and computationally efficient mesh. 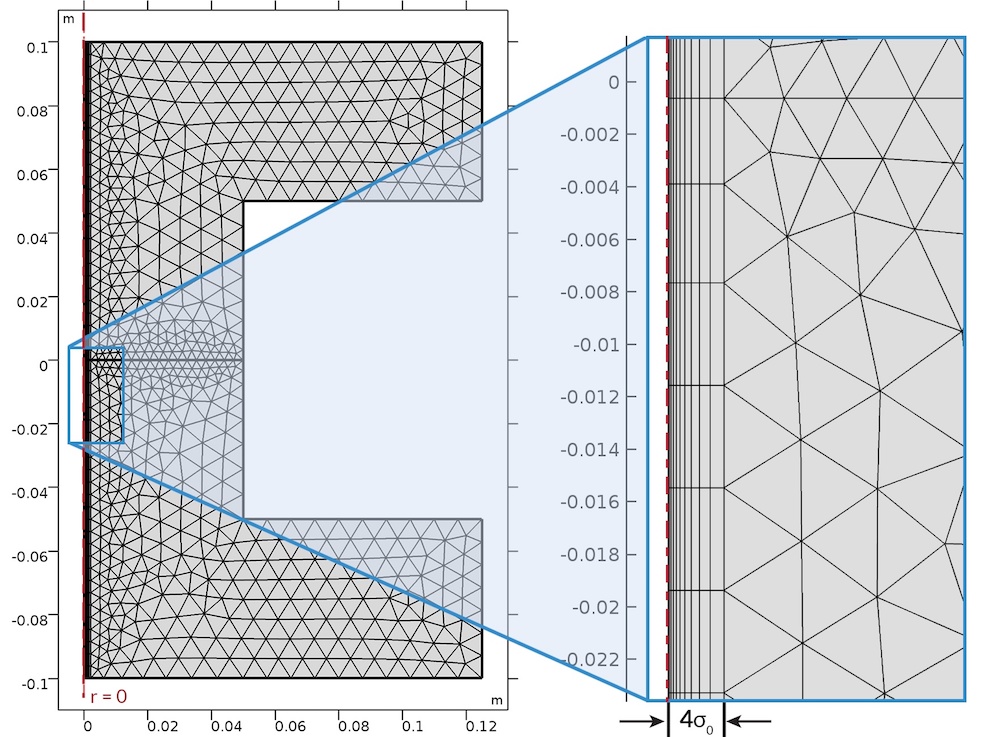 The COMSOL® software solves the model to find the frequency response, pressure, and sound pressure level. In addition, an eigenfrequency study is performed, which shows that the pulsating laser excites the symmetric eigenmodes, not the asymmetric ones. 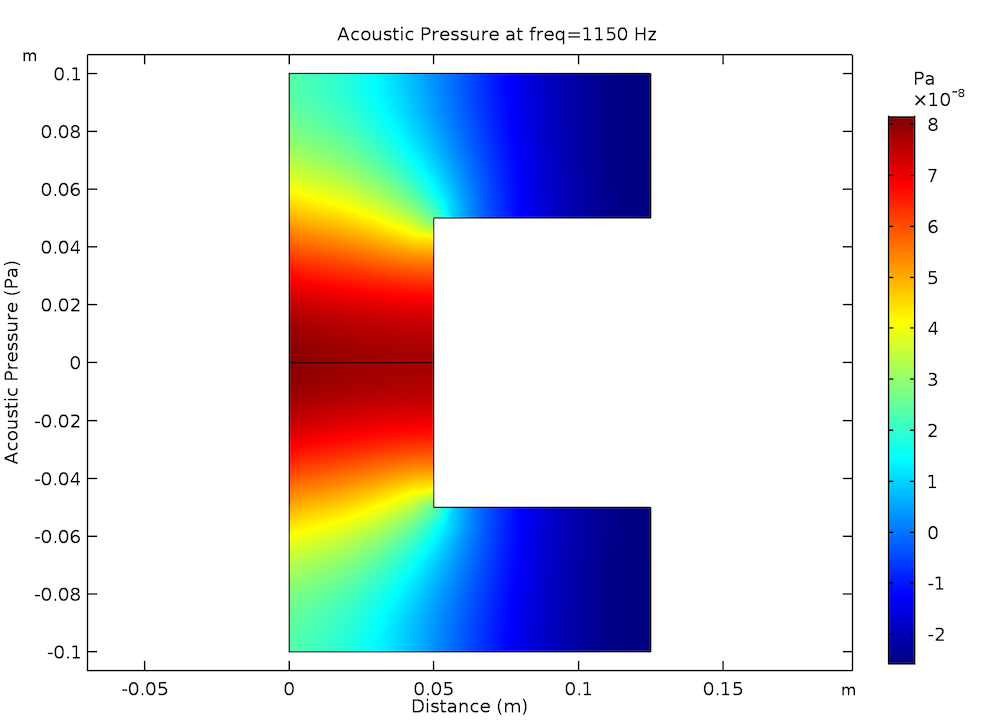 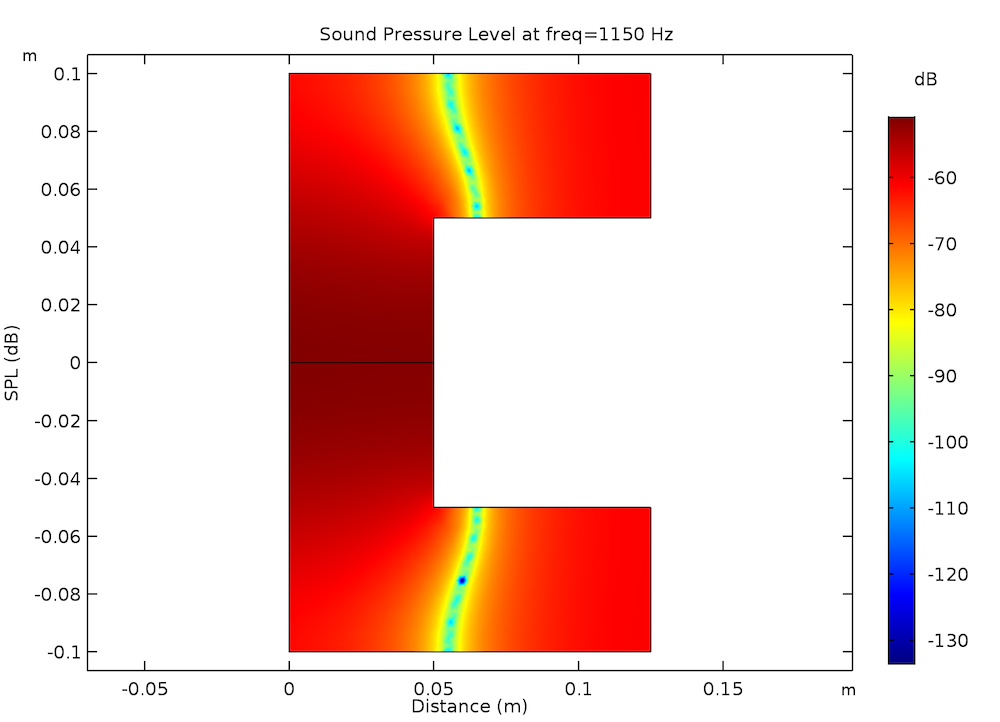 The pressure (left) and sound pressure level (right) of a photoacoustic resonator.

Other Applications of Photoacoustic Methods

Photoacoustics combines the capabilities of optical and acoustical imaging. This combination offers the best of both worlds in terms of biomedicine, as it makes photoacoustic imaging a multiscale, high-resolution, and noninvasive technique.

A video showing photoacoustic imaging of a tumor in human breast tissue. Video file by M. Toi et al. and licensed under CC BY 4.0, via Wikimedia Commons.

Some potential applications of photoacoustics for biomedicine (Ref. 2) include:

Photoacoustics sheds light on the three main phenomena that occur within plants and algae during the process of photosynthesis:

One major benefit of photoacoustics for this type of research is that measurements can be performed in vivo. Researchers can study photosynthesis in a living plant, enabling them to see how herbicides, soil toxicity, and more affect plants in real time. 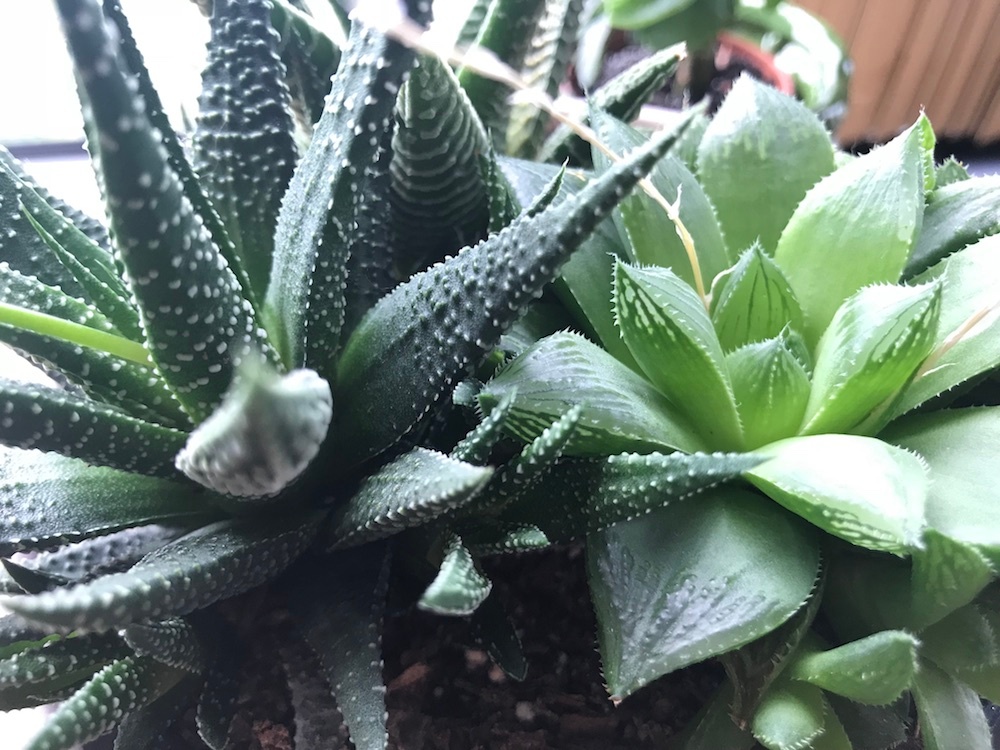 Photoacoustics can be used to analyze different types of plants and algae.

For example, researchers used photoacoustics to analyze the efficiency of photosynthesis in phytoplankton, as well as its biomass. Doing so enabled them to see how the presence or absence of different nutrients affected the plant samples with studies that were faster, easier, and more direct than other methods. (Ref. 3)

Photoacoustic spectroscopy (PAS) is an ultrasensitive way to detect trace amounts of molecular gas flow in a sample of air. This is useful for monitoring pollution levels, detecting chemical agents and explosives, as well as monitoring illegal drug manufacturing sites.

In PAS, a laser beam is tuned to the specific absorption feature of a gas and swept through the sample at the speed of sound, which generates acoustic waves. The signal is amplified without a resonate chamber, enabling the gas to be detected remotely, and at very trace amounts. PAS is so sensitive that it has even detected the molecular flow of gas at 50 parts per trillion! (Ref. 4)

We’ve talked about how photoacoustics can be used in medicine, biology, and gas detection, but it also has a place in the art world. Photoacoustic microscopy (PAM) is the use of photoacoustics to uncover hidden features in works of art, such as the original sketch lines of a painting. This method can penetrate opaque layers of paint without damaging the artwork, unlike optical imaging and other methods.

PAM utilizes a conventional optical microscope with an inverted lens. A laser is pulsed at the inverse side of a painting (the blank side of the canvas) to reveal the patterns underneath. To test the process, researchers created mock versions of famous paintings to see how red, blue, and green paint — as well as sketching materials such as pencil and charcoal — respond to PAM.

This type of research could be used to verify the authenticity of valuable artwork and even answer some of the art world’s greatest mysteries. If Leonardo Da Vinci wrote the name of Mona Lisa’s subject on the famous painting, for instance, we could use this method to find out her true identity!

Get a closer look at the specialized features and functionality for acoustics modeling by clicking the button below:

Show Me the Acoustics Module

Topology Optimization of a Magnetic Circuit for Loudspeakers 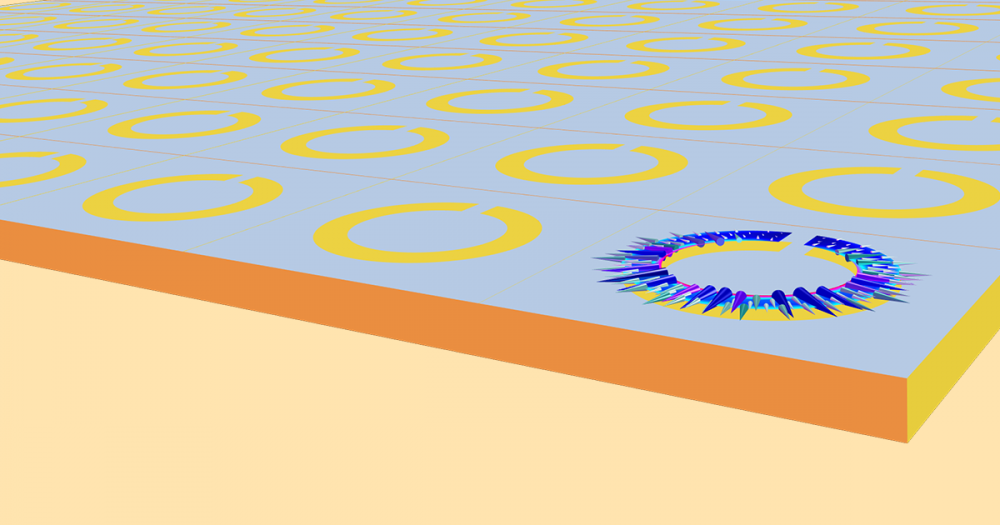 Streamlining the Design of Frequency-Selective Surfaces