Studying the Influence of Concrete Phenomena on Sensor Performance

Many parameters can impact the strength and stability of concrete structures, so finding ways to efficiently measure their condition is key. Embedding sensors within these structures can provide such assessments. To accurately model these systems, it’s important to account for the complex phenomena within concrete and analyze their impact on sensor performance. The flexibility of the COMSOL Multiphysics® software allowed one research team to do just that. Their findings offer insight into designing more reliable sensors for concrete monitoring.

Concrete: A Material Used Throughout the Ages

For many years, landmarks like the Hoover Dam and the Pantheon have attracted the attention of tourists. While these structures are most recognized for their famous history, they have something else in common: Both were built using concrete. 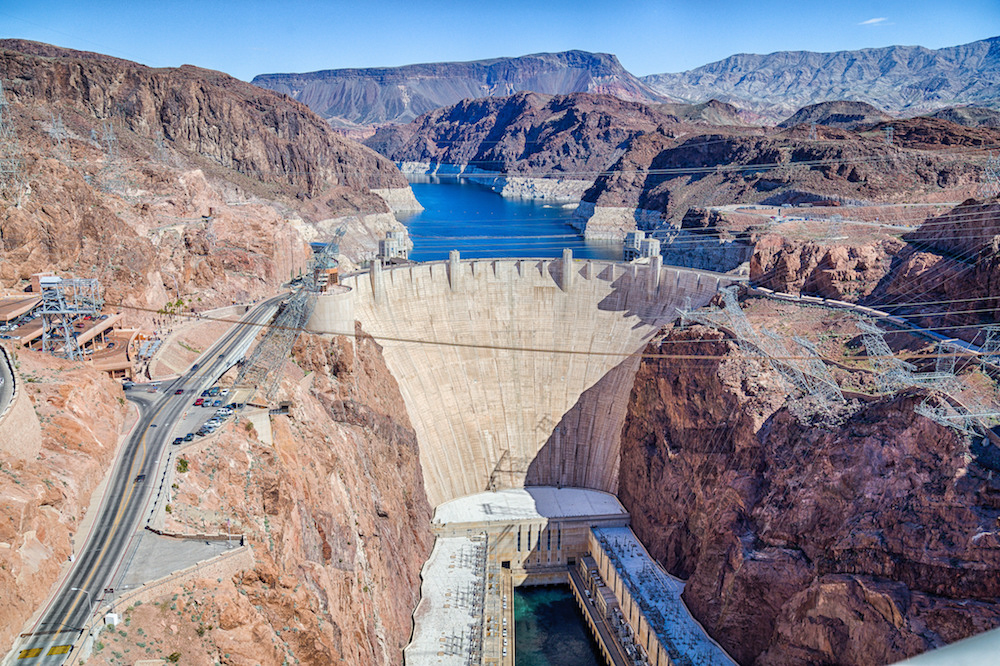 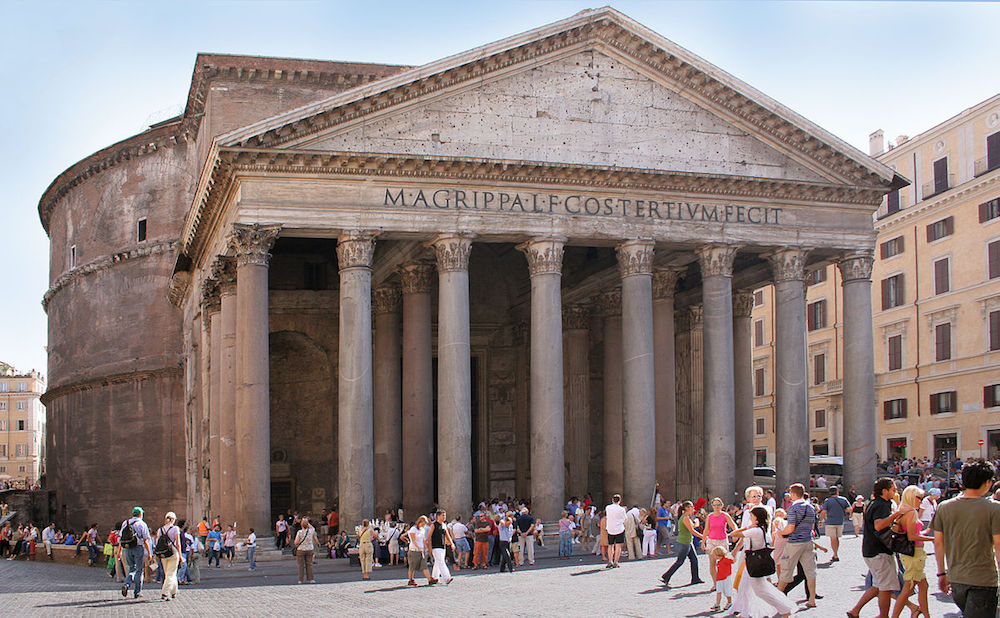 This manmade material — the most widely used in the world — is the foundation for many modern buildings and structures. In recent years, there has been a growing trend of embedding sensors within these structures as a means for measuring the concrete’s condition. This provides an efficient way of monitoring how important parameters like temperature, humidity, and pressure impact the strength and stability of the material.

To design reliable sensors for this purpose, engineers must have an understanding of the properties of concrete and their influence on sensor performance. But due to its unique properties, concrete can be a rather complex material to analyze. For instance, because concrete is viscoelastic, it experiences a time-dependent strain increase when a constant load is applied. This effect, known as viscoelastic creep, is particularly prominent when concrete is subjected to forces for a long period of time. Even when the temperature conditions are steady, concrete structures may undergo a volumetric change. When this occurs without environmental thermal exchange, it is called shrinkage. 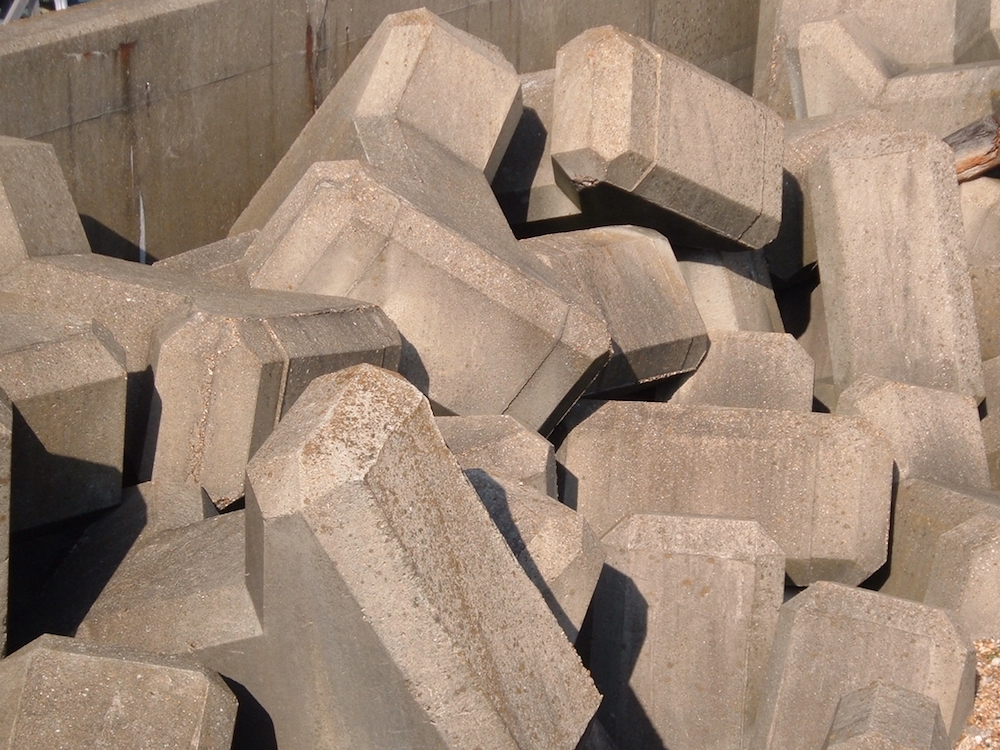 The unique properties of concrete make it a complex material to study. Image by Les Chatfield. Licensed under CC BY 2.0, via Flickr Creative Commons.

With the flexibility of COMSOL Multiphysics, a research team from STMicroelectronics in Italy was able to successfully model the complex phenomena in concrete and predict their influence on the performance of an embedded sensor design. This shows an example of a technology group that is versed in one type of application — sensors and the optimization of their designs — using COMSOL Multiphysics to study another application that directly affects their application — the deformation of concrete.

Modeling the Complex Phenomena in Concrete

The researchers began by first addressing concrete viscoelasticity. To realistically describe the concrete’s viscoelastic behavior, the team implemented their own Kelvin chain model in COMSOL Multiphysics and solved strains within each of the eight Kelvin branches.

To validate the model, the researchers used a theoretical model of a simple system featuring a concrete cylinder under uniaxial pressure. The cylinder, which is 7 cm in height and diameter, has a compressive strength of 48 MPa. The analysis includes the assumption that the environment is comprised of 50% relative humidity.

The researchers built a model in COMSOL Multiphysics of this same system, comparing their simulation results for the creep with trends observed in the theoretical model. As highlighted below, the findings show perfect agreement with one another. 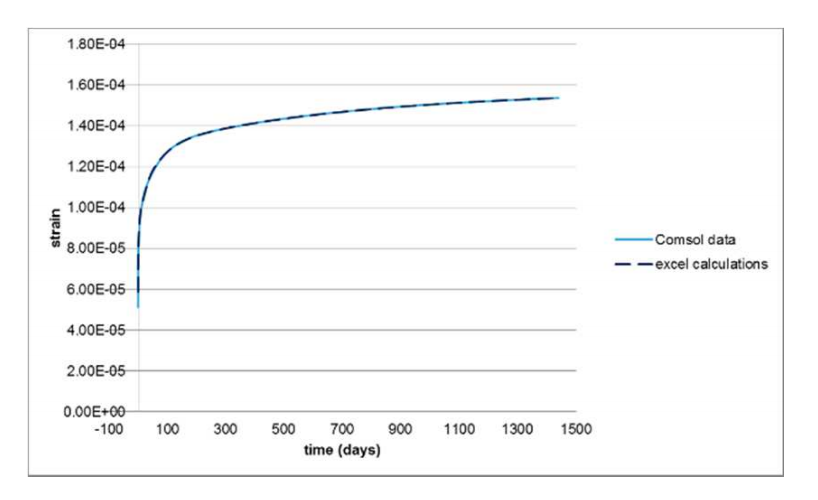 Comparison of the results for the creep experiment. A constant load of 1 MPa is applied in the simulation study. Image by A. A. Pomarico, G. Roselli, and D. Caltabiano and taken from their COMSOL Conference 2016 Munich paper.

The team then shifted gears to modeling the time-dependent concrete shrinkage. This involves using a strategy based on thermal phenomena. After calculating the shrinkage profile via equations, a unitary thermal coefficient is applied to the concrete material. For the theoretical model, a temperature profile in agreement with the computed shrinkage is used. The resulting thermal strain is meant to imitate the actual shrinkage.

Using the same benchmark model from the creep test, the team calculated the shrinkage strain. As before, the two results show perfect agreement. 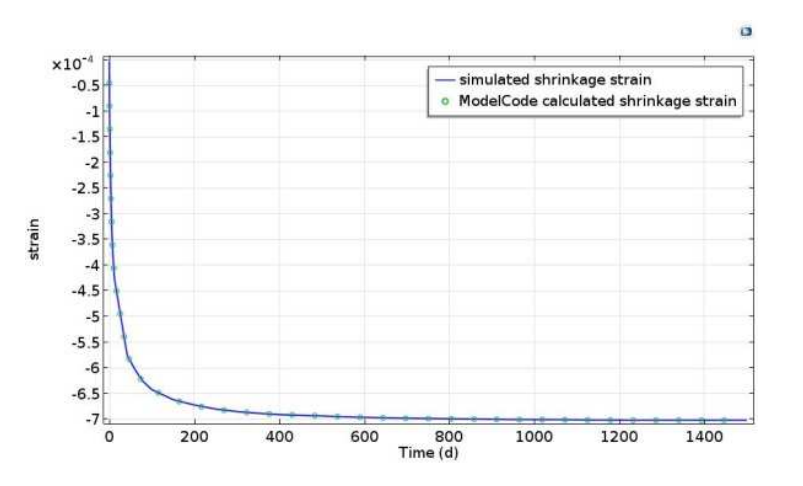 Comparison of the results for shrinkage strain. In the simulation study, the time frame is around 1500 days. Image by A. A. Pomarico, G. Roselli, and D. Caltabiano and taken from their COMSOL Conference 2016 Munich paper.

Evaluating the Influence of Concrete Phenomena on Sensor Performance

After validating their COMSOL Multiphysics model for both viscoelastic creep and shrinkage, the researchers sought to address a more complex scenario — when a silicon sensor is embedded within the concrete. While concrete creep and shrinkage can affect all sensor types, analyzing their effect is especially relevant for pressure sensors.

To represent a simplified sensor structure for measuring pressure, a cylindrical sensor with a height of 600 μm and diameter of 2 mm is used. The membrane (the sensing portion of the configuration) is 10 μm thick with a radius of 700 μm and an internal cavity depth of 50 μm. At the top of the cylinder, a constant load of 10 MPa is applied. 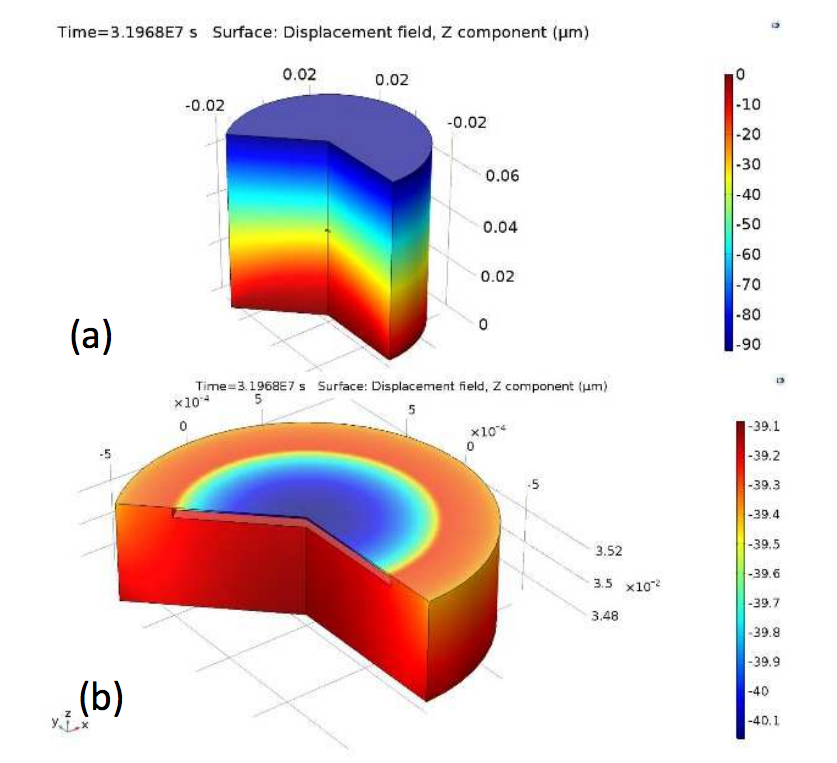 The geometry of the simulated sensor structure (a), with a zoomed-in version depicting the sensor’s axial displacement (b). Image by A. A. Pomarico, G. Roselli, and D. Caltabiano and taken from their COMSOL Conference 2016 Munich paper.

Initially, with only creep equations applied, the creep greatly affects membrane displacement over time. Its impact is particularly noticeable at the center of the membrane and close to one of its edges. 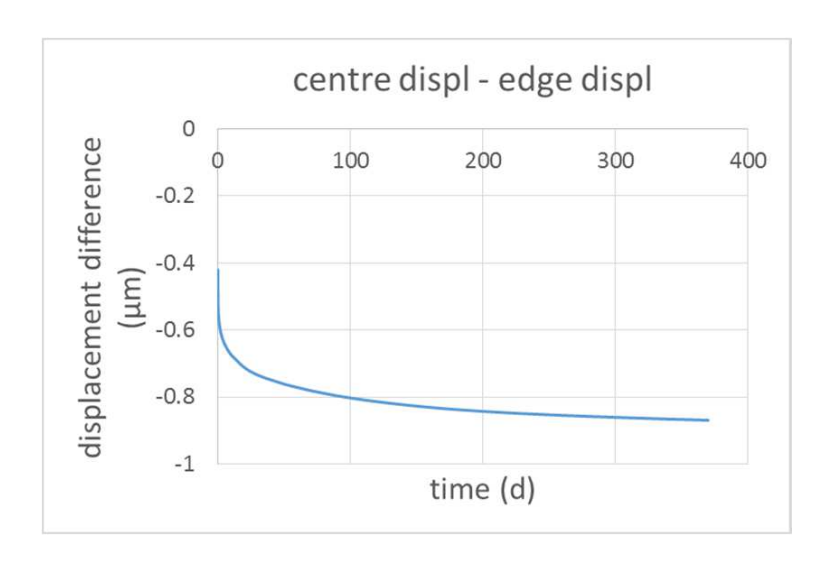 The difference between the vertical displacement at the center of the membrane and near one of its edges. Image by A. A. Pomarico, G. Roselli, and D. Caltabiano and taken from their COMSOL Conference 2016 Munich paper.

The next aspect evaluated is the potential relationship between creep-induced changes and stress inside the membrane. The results show that stress does increase over time. The example below highlights this with respect to radial stress distribution. 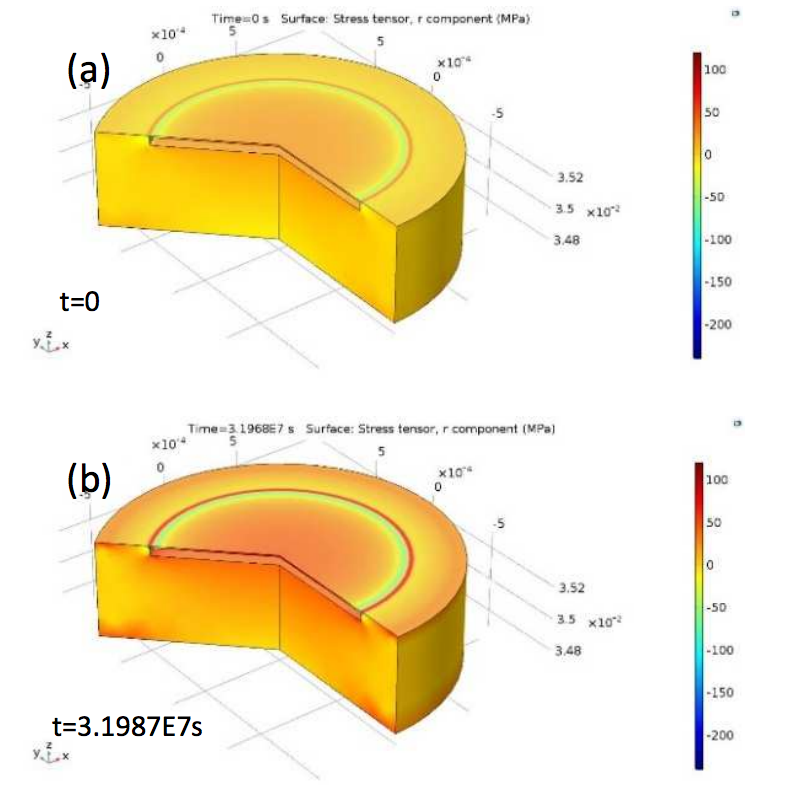 The radial stress distribution on the sensor when the time span begins (a) and when it ends (b). Image by A. A. Pomarico, G. Roselli, and D. Caltabiano and taken from their COMSOL Conference 2016 Munich paper.

The following plots provide even more detail, showing the radial and angular stress components along the membrane’s radius when the analysis first starts and when it ends. Due to the creep effect, these components vary over time. Assuming that stress-sensing piezoresistive elements have been fabricated on the membrane, it is possible to observe the impact of a time-dependent creep-induced variation on sensor performance. Note that the positioning of the piezoresistive elements impacts these results. 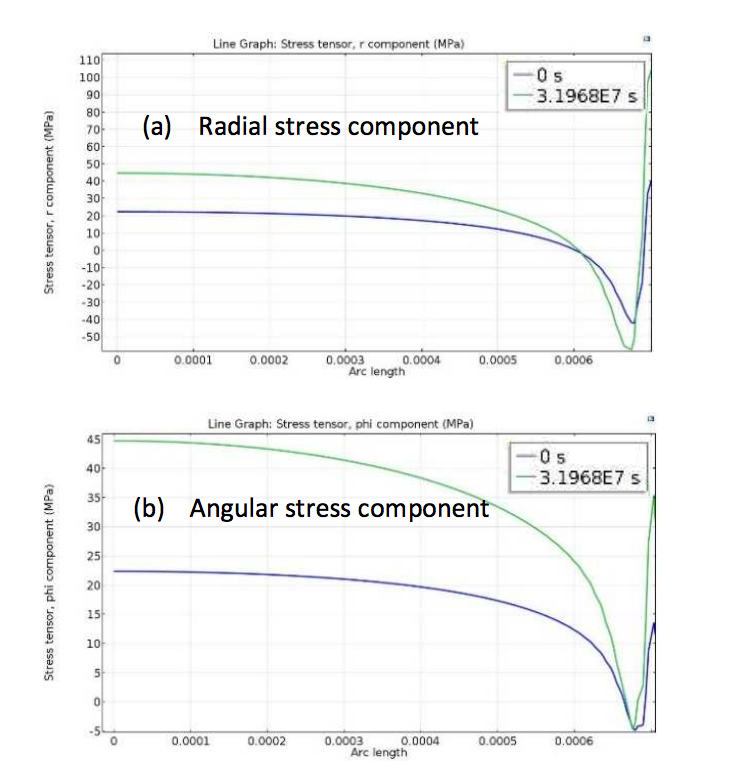 Radial stress (a) and angular stress (b) along the radius. Image by A. A. Pomarico, G. Roselli, and D. Caltabiano and taken from their COMSOL Conference 2016 Munich paper.

The behavior of the membrane is also influenced by shrinkage. When adding shrinkage to the model that only previously accounted for creep, a small change in deformation occurs near the center of the membrane. On the other hand, shrinkage has a large effect on stress distribution.

The two stress component distributions at the end of the time frame are then compared, with one analysis that includes shrinkage and one that doesn’t. When only creep is considered, there are changes in stress distribution on the membrane of both components. It is therefore assumed that there is also a shrinkage-induced effect on sensor performance. Once again, the location of the piezoresistor elements impacts the results. Note that the shrinkage effect has a greater influence on the angular stress than on the radial stress. 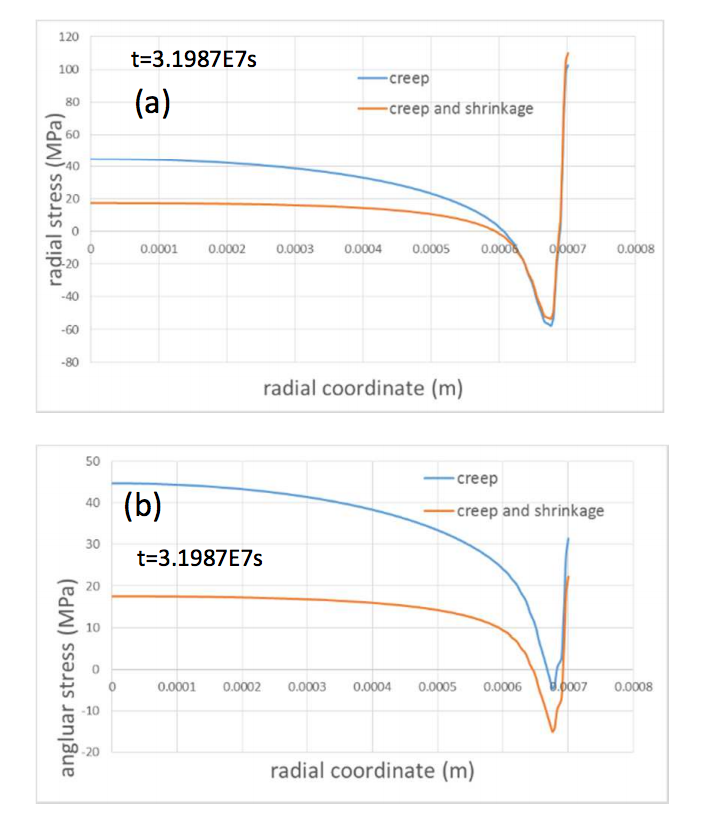 Comparison of the radial stress (a) and angular stress (b) along the radius — both with and without shrinkage. Image by A. A. Pomarico, G. Roselli, and D. Caltabiano and taken from their COMSOL Conference 2016 Munich paper.

As the results indicate, creep and shrinkage — two of concrete’s unique properties — change the deformation and stress within a sensor’s membrane. This in turn affects sensor output, specifically the output voltage of the piezoresistors that are implemented on the membrane. Such findings are critical in the design of reliable pressure sensors for monitoring the condition of concrete. 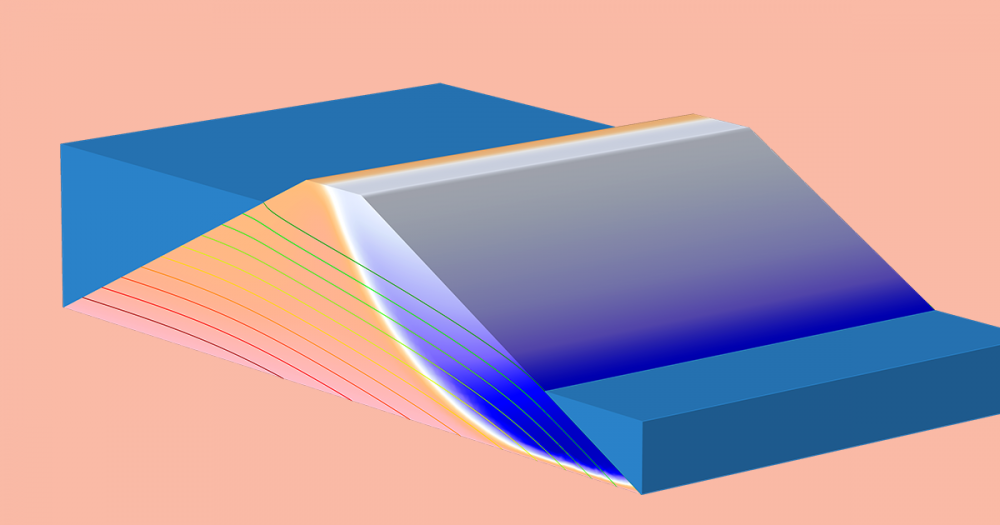 Analyzing the Impact of a Melting Frozen Inclusion