In order to make it easy to get started with the Application Builder, we included a few example applications in the Application Libraries of COMSOL Multiphysics version 5.0. This blog post will give you an overview of the Tuning Fork application and the structural vibration model that it is based on.

A tuning fork is used to calibrate instruments to a standard pitch. The most common standard pitch is 440 Hz for the note A. However, there are also other standards in use, frequently based on the note A. For example, the New York Philharmonic and the Boston Symphony Orchestra use 442 Hz and many orchestras in Europe use 443 Hz. You can buy tuning forks corresponding to all of these standards, but also tuning forks for other notes such as C, E, and G.

The picture shows a tuning fork for the standard concert pitch 440 Hz.

In addition to musical applications, there are industrial applications of tuning fork-like structures, such as in MEMS gyroscopes. The mechanism of vibration is similar in all these cases, so let’s discuss that first.

When you strike a tuning fork, it will vibrate in a complex motion pattern that mathematically can be described as the superposition of so-called resonant modes, or eigenmodes. Each mode is associated with a particular eigenfrequency and the combination of all eigenfrequencies creates the specific timbre that makes the characteristic sound of a tuning fork.

The pictures below show the qualitative mode shapes of a few of the first eigenmodes. The deformations are exaggerated to show the shapes more clearly. 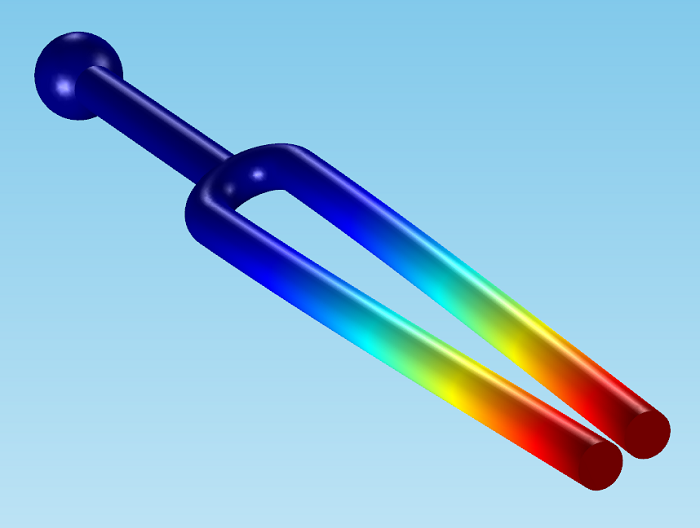 The fundamental vibrational mode of a tuning fork at 440 Hz. 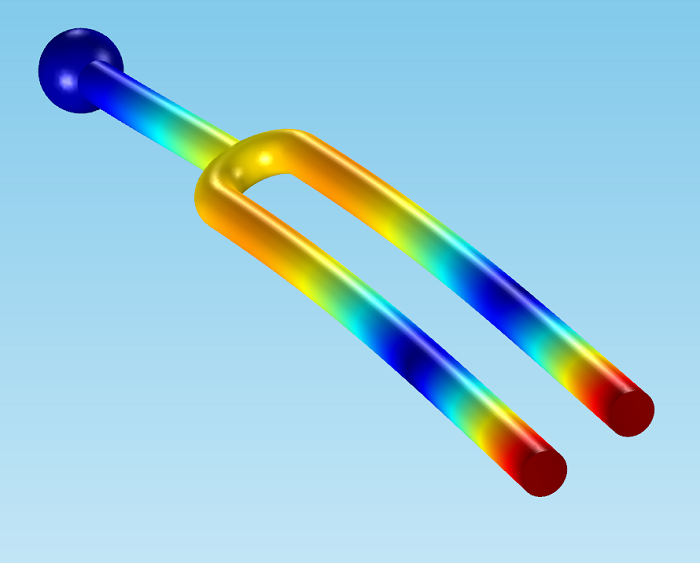 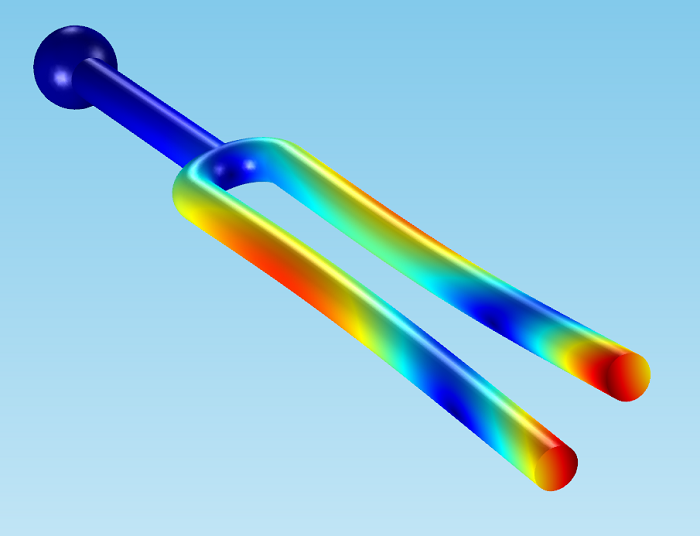 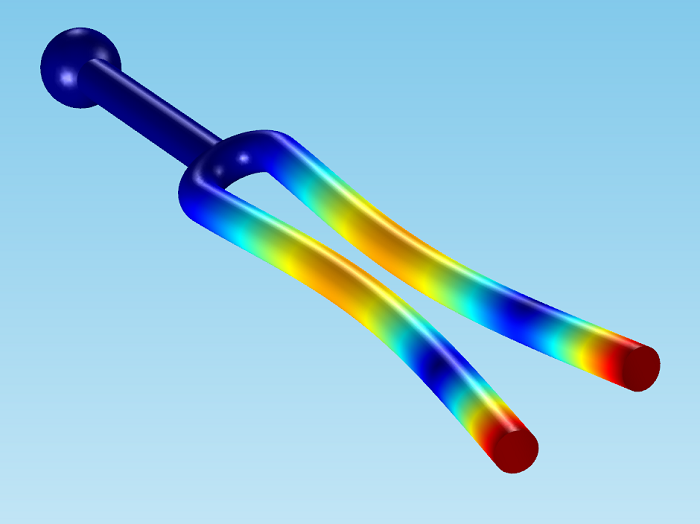 The fundamental mode has the prongs vibrate back and forth in a symmetric and balanced fashion, which transfers very little force to the handle. This mode is weakly dampened and sustained the longest after a strike. Many of the higher resonant modes have a twisting and rotational motion that transfer plenty of force to the handle and will be dampened out quickly by a hand holding it. The first balanced higher mode that, again, transfers very little force to the handle is at 2800 Hz and will sound together with the fundamental mode when striking the tuning fork.

A spectral analysis of a sounding tuning fork in real life indeed reveals this to be the case:

A frequency spectrum of a ringing tuning fork dB vs. frequency. Peaks are clearly visible at 440 Hz and 2800 Hz, corresponding to modes that are balanced with little force transfer to the handle and, so, less damping. Created from a recording of a tuning fork using the software Cubase® 7.5 from Steinberg® Media Technologies GmbH.

As a side note (pun intended), the transient timbre of a tuning fork, including tonal contributions from the higher resonant modes, is what creates the characteristic sound of a Rhodes electric piano, which is essentially a collection of tuning forks, or tines, of different lengths.

In COMSOL Multiphysics, you cannot only simulate the vibration of the tuning fork, but also its coupling to the surrounding air domain and the resulting acoustic pressure wave. This capability is available in the Acoustics Module and is illustrated below. 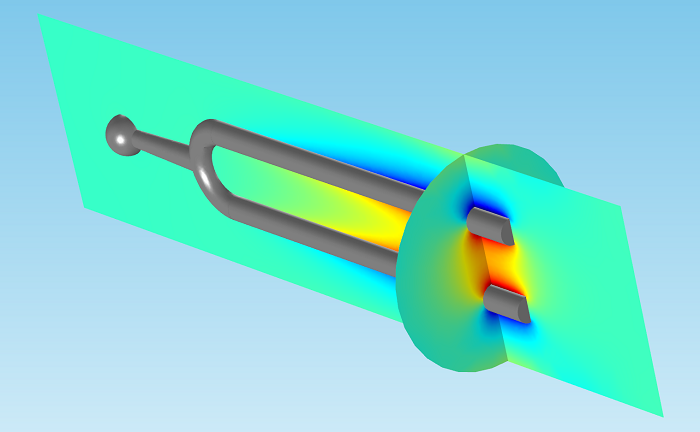 A vibrating tuning fork with its surrounding air pressure wave as computed by the Acoustics Module.

The tuning fork application in the Application Libraries does not include the surrounding pressure wave, but is just a structural modal analysis. The core COMSOL Multiphysics product without any add-ons is sufficient to run this app.

Accessing Apps from the Application Libraries

The Tuning Fork app can be found in the Application Libraries, available from the File menu in the COMSOL Desktop user interface. 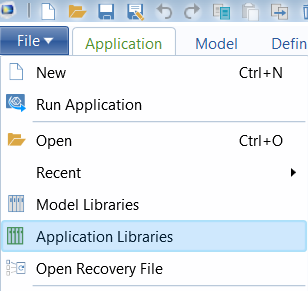 Where to find the Application Libraries.

Where to find apps within a Model Gallery entry. 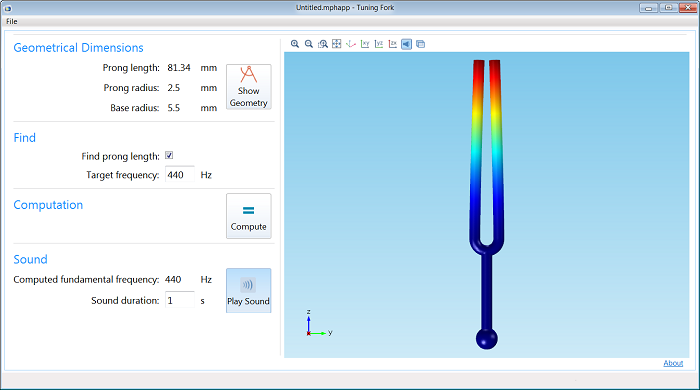 The app shown here is based on the Tuning Fork: Computing the Eigenfrequency and Eigenmode model, with minor modifications. The handle in the application is cylindrical, while in the other model example, it is slightly conical.

Your app’s user interface is created in the Form Editor and is streamlined with only a few outputs and user inputs: 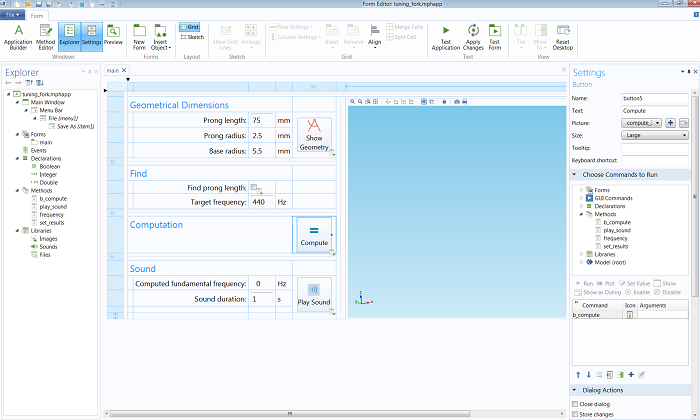 The Form Editor containing the user interface design of the tuning fork application.

The tuning fork application contains several methods, both local and global ones. A local method can be associated with a form object as indicated by a small icon in the lower right corner of the object. In this application, the objects having local methods are the three buttons for “Show Geometry”, “Compute”, and “Play Sound” as well as the check box “Find prong length”.

These local methods handle basic user interface logic such as enabling and disabling the input field for “Prong length” based on the status of the “Find prong length” check box. 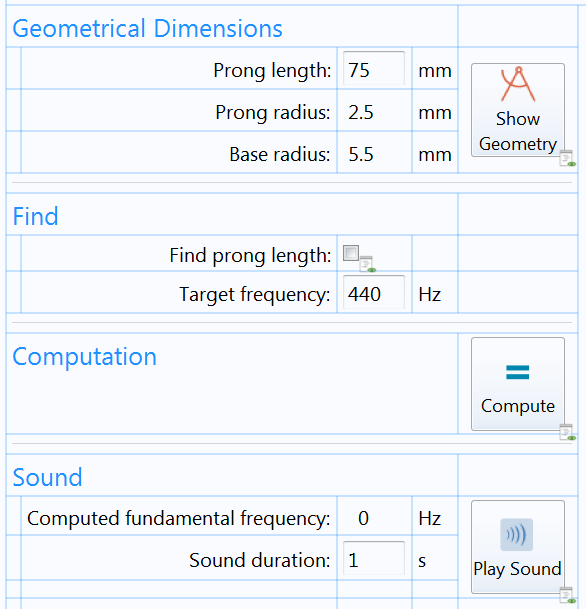 A local method associated with a form object is, in the form editor, indicated with a small icon in the lower-right corner.

To open a local method in the method editor, use Ctrl+Alt+Click on the form object.

The most important global method is b_compute, which contains a secant method implementation for finding the prong length for a given frequency. The secant method requires a good starting guess and this is provided by an expression for the eigenfrequency vs. prong length relationship given by elementary beam theory. For more information on this beam theory expression, see the model documentation for the Tuning Fork model.

There is also a play_sound method that simply plays the fundamental frequency (with no overtones): playSound(fq, 1000*dur). The first argument to playSound is the frequency and the second argument is the sound duration in milliseconds. One could, of course, also perform a full transient simulation of the tuning fork as it is being struck, but this would require a lengthy computation and extensive processing of the results to find the fundamental frequency. Instead, the implemented modal analysis can be performed in less than a minute on a standard computer.

A method frequency computes the frequency for a given length and is called from the b_compute method.

The method set_results sets the results visualization and frequency output to be that of the seventh eigenmode in the list of found eigenfrequencies. The first six eigenmodes are referred to as rigid body eigenmodes and do not contribute to the sound of the tuning fork. They represent the six degrees of freedom of motion of a rigid body: translation in the three coordinate directions and three rotational angles. The seventh eigenmode corresponds to the fundamental vibrational frequency, which is true for any unconstrained object. 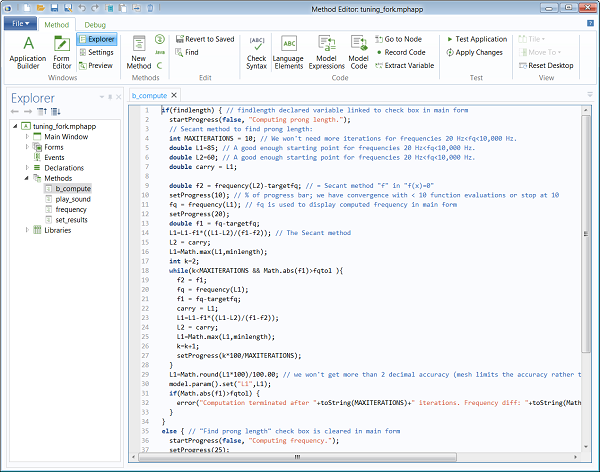 The Method Editor showing the method used to compute the tuning fork prong length for a given frequency.

Why Do Tennis Rackets Tumble? The Dzhanibekov Effect Explained… 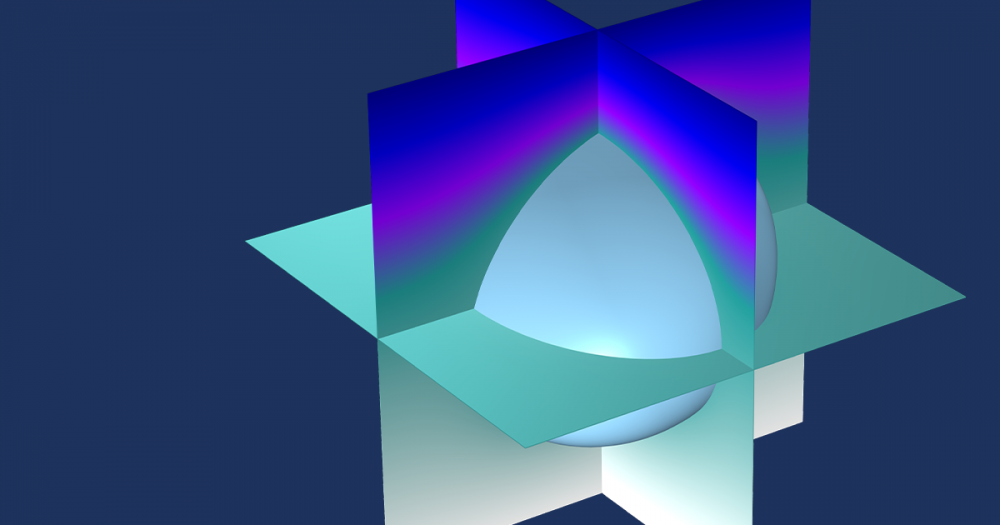 Dear Bjørn
I’m astonished you are not pushing a little bit further the discussion, because you have 2 fundamental modes very close around the 442-444 Hz frequency: the symmetric (both arms moves in the opposite direction) and anti-symmetric modes, that both are excited by a shock, but only one remains to give the right tune, due to damping via the fingers of the user.

You can easily show that by adding a local spring damper on the support in COMSOL.

The symmetric mode does not change the position of the CoG of the tuning fork, while the anti-symmetric mode does change the Cog that moves left and right at the resonant frequency, this motion is felt by the finger supporting the tuning fork, and will rapidly be damped away. You can also see this motion by studying the Mass participation Factors for the different modes, and if you add a spring damper you will see the very large spread in the complex part of the eigenfrequency illustrating which mode is damped more or less.

I’m glad you find the blog post inspiring. There are many facts about the resonant modes of a tuning fork that we left out of this blog post. The theory in this posting only serves as an interesting background for the tuning fork application in the Application Library of the Application Builder. That tuning fork is an unconstrained one and a lot simpler than one where the damping of the handle is considered. There are enough interesting topics to cover about the resonances of a tuning fork that we will most likely write a specific blog post about that later. Some topics we may cover in a future blog post are: Why don’t you see the close fundamental modes for an unconstrained tuning fork? What about nonlinear effects? What happens if you hold the tuning fork to a resonant box? Dipole and quadrupole effects in an acoustic radiation simulation? Too many interesting topics to fit into this blog post I’m afraid;-)

Your two tuning fork blog posts are brilliant! Really nicely done! I have actually published three papers (American Journal of Physics, 1992, 2000, 2013) about the vibration and sound radiation from tuning forks, and in the 1992 paper we discussed the puzzle of the octave in the stem and the (nonlinear) generation of the octave in the tines if you hit the fork really hard. The 2000 paper explains the sound radiation patterns and the quiet spots (which aren’t actually at 45 degrees).

I would love to know where you obtained the tuning fork with the circular tines. All of the forks I have tested have square (rectangular) tines, and I would like to see if anything I have studied changes for forks with circular tines.

I would also like to know if the COMSOL mph source files are available for your models? I couldn’t find working links on your blog. Are they available from the COMSOL library? I would like to explore your model further.

I’m glad you liked our tuning fork blog posts. Thank you. We were not aware of your published papers. Thanks for letting us know. We’ll review them. The circular tines tuning fork is a “Planet Waves Tuning Fork, Key of A” and was ordered from Amazon.

The application files (.mph) are available from this resource:
https://www.comsol.com/model/tuning-fork-8499

I hope this helps,
Bjorn

For those interested, Daniel has provided this very nice web page on the various vibrational modes for a tuning fork with rectangular tines:
https://www.acs.psu.edu/drussell/Demos/TuningFork/fork-modes.html

i just opened the model and realized you did not add air – is that not important for a detailed analysis?

Correct, this model only covers the structural mechanics side. However, the surrounding air domain will not affect the resonances much. For other blog posts covering also the surrounding air domain, please see:
https://www.comsol.com/blogs/finding-answers-to-the-tuning-fork-mystery-with-simulation/
and
https://www.comsol.com/blogs/tuning-an-orchestra-with-the-help-of-multiphysics-simulation/
Please note that one of the models in the latter blog post is temporarily unavailable. We will make it available again shortly.

See also this other blog post we have made on tuning forks:
https://www.comsol.com/blogs/finding-answers-to-the-tuning-fork-mystery-with-simulation/