Cardiovascular disease is a condition where the arteries in the heart are blocked by plaque. Narrowed arteries can restrict blood flow and cause chest pain and shortness of breath. Bare metal stents can be used to resolve the problem, but excessive tissue can grow over them and narrow the artery again (a process called restenosis). Engineers at Boston Scientific are using simulation to understand the release mechanisms in drug-eluting stents, which can be used to prevent this excess cell growth.

How Stents Can Control Cell Growth

Stents are small mesh-like scaffolding structures that are designed to expand inside arteries, holding them open to allow normal blood flow. Excess tissue growth is the body’s natural healing response to the injury induced during the stent placement process. However, this impedes recovery as the tissue growth constricts the artery again. Hence, drug-eluting stents are used to deliver medicine into the arterial tissue and prevent unwanted growth.

Schematic showing (A) a blood vessel blocked by plaque with restricted blood flow; (B) the process of inserting and expanding a stent; and (C) blood flow in the vessel returned to normal due to stent expansion (left), a close-up of the stent arrangement inside the blood vessel (center), and the cross-sectional design of the stent strut (right).

Such stents include a coating that comprises a polymer matrix for the controlled delivery of medicine; this coating surrounds each strand of the mesh (see part C in the figure above). Although much headway has been made into stent designs, the drug-release process is not fully understood.

Boston Scientific is a company that develops technology for diagnosing and treating a vast range of medical conditions. A group of engineers, including Travis Schauer and Ismail Guler, have examined the drug-release process using a COMSOL Multiphysics simulation that describes the release profile from a stent coating (read the full story in COMSOL News 2014). They aimed to understand the rates of medicine diffusion from the coating and into the artery tissue, using the Optimization Module (an add-on to COMSOL Multiphysics) to fit their simulation to experimental data. They hope that understanding the release profiles will eventually lead to better control over drug release.

Their model includes the polymer and the coating’s surface-connected component, which is rich in medicine. When this medicine-rich phase dissolves quickly, diffusing into the artery, it leaves behind a microstructure of interconnected pores. The drug molecules, encapsulated by the polymer matrix, diffuse more slowly over time. 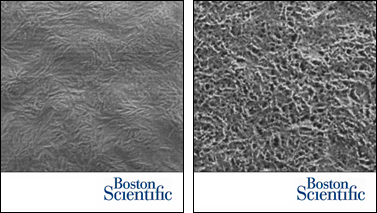 Schauer and Guler idealized the coating microstructure for their simulation, using it to track the dissolved drug molecules that diffuse relatively quickly through the pores and the molecules dissolved in the polymer that diffuse very slowly. They found that it was easy to customize their model using COMSOL Multiphysics; “we focused on understanding the transport phenomena at hand instead of spending time on cumbersome programming,” said Schauer. “We customized the underlying equations according to our needs directly through the user interface.”

Many factors influence the microstructure, such as the ratio of drug to polymer, drug solubility, and even the manufacturing process. Wanting to understand why certain release profiles occurred, they tracked the cumulative medicine release. They had to account for certain changing parameters, including the solubility limit of the medicine (which is different in liquid media, such as blood in the tissue, than it is in the solid polymer). Other values had to be estimated, including a retardation coefficient to account for the constriction and twisted shapes of the pores.

Schauer and Guler refined these parameters using the COMSOL software and compared their model’s predictions to kinetic drug release (KDR) data. Their simulation confirmed that the drug molecules in the pores released quickly, while the molecules in the polymer shell diffused more slowly. 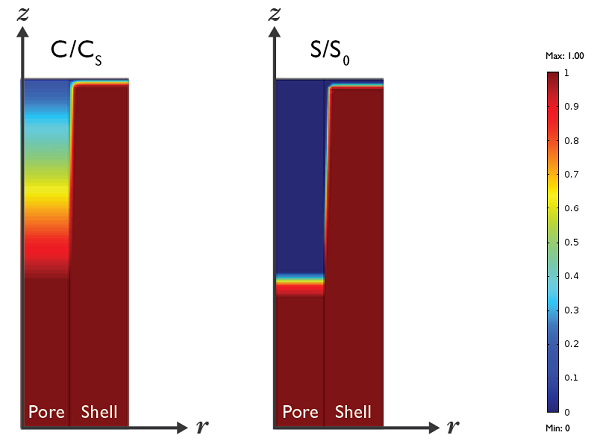 Their modeling approach has offered valuable information regarding this type of release mechanism. Even more comprehensive simulations are ahead to aid in the understanding of the microstructure formulation. Eventually, a simulation, based on diffuse-interface theory, may be able to fully explain the relationship between microstructure, processing, and release behavior, giving medical device designers finer control over the drug delivery process and offering patients with cardiovascular disease better treatment for restenosis. 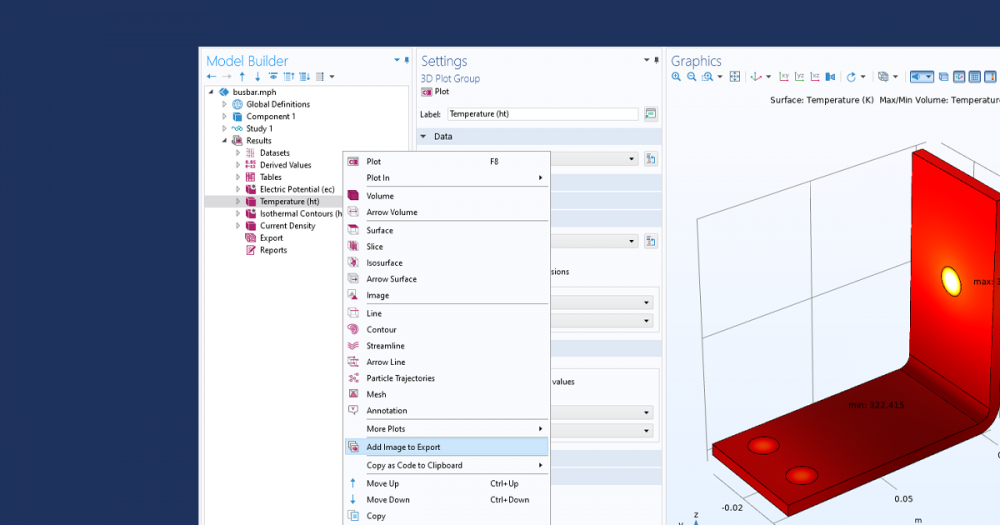 How to Run COMSOL Multiphysics® from the Command Line